It struck me when I re-read Baroness Orczy’s excellent ‘The Scarlet Pimpernel’ recently that there is something quite odd about the scene at the beginning of the novel where the audacious Sir Percy, disguised as a tricoteuse, dupes a French guard and drives a cart filled with rescued aristos out the gates to safety. The book does not immediately tell us the hideous old woman is in fact the Scarlet Pimpernel but there are many clues in the descriptions. Certainly, the obvious relish with which Percy plays up the role makes it fairly easy for the reader to work out that it must be the Scarlet Pimpernel well before the French guard does. However, what I noticed on re-reading this scene was not so much the bold daring of the hero or even the extent to which he seemed to enjoy* his exceedingly dangerous scheme so much as the fact that it is almost impossible for me to picture a man dressed up as an old woman without finding it ridiculously comic. The scene itself is certainly not amusing. The descriptions of the horrors of the French revolution are pretty grim. Details such as the trinkets of hair from the scalps of the freshly guillotined heads and the blood-stained fingers of the fake tricoteuse running over them are fairly grotesque. The physical features of the old woman are depicted as being as foul and haggish as one of Macbeth’s witches. In the dialogue she hints that she may even may a plague carrier. Certainly, the scene is laden with dramatic irony, but there’s little in it that is actually funny. However, as soon as I picture this scene in my mind it becomes a bit farcical. Sir Percy’s disguise suddenly becomes something between an old lady outfit that John Cleese would wear in a Monty Python sketch and that scene from ‘Wind in the Willows’ where Toad dresses up as a washerwoman to escape from prison. I can’t take it seriously. The bravery and danger of the scenario becomes reduced to a cartoon scene where Scooby and Shaggy put on grey wigs, grab knitting needles and point behind them when a guard asks them what way the Scarlet Pimpernel went. I’m not sure if this would have been such a problem to the contemporary readers of ‘The Scarlet Pimpernel’ although admittedly most of his other daring escapes and disguises did not involve dressing up as an old woman. Has it always been a deeply ingrained cultural assumption that men dressing up as old ladies are intrinsically funny or it a more recent development that stems out of twentieth century humour? Is it just that a modern audience is so used to pantomime dames, cartoon conventions and an abundance of television comedy with men doing falsetto voices and wearing old lady costumes that we associate it with ridiculous hilarity? I don’t think a woman dressing up as an old man would ever be considered to be quite so funny. The literary history of woman cross-dressing has always been admirably adventurous if anything. Shakespearian cross-dressing heroines such as Rosalind and Violia were brave, resourceful and spirited. In fact the majority of my favourite female characters in Shakespeare are the ones who run about in men’s clothes. There is also the traditional image of the young woman who dresses as a knight or soldier to go and heroically fight for a cause she passionately believes in. Of course, this may be part of the reason for the double-standard in the relative humour levels of male/female cross-dressing. There are numerous examples of women who wear men’s clothes so that they may defiantly do something which they were prohibited from doing. It’s pre-feminist feminism. ‘I’m going to do this thing that you say women can’t do even if I have to dress up as a man in order to do it.’ But is that the only reason why it seems to be more amusing for a man to wear woman’s clothes than the other way round? If it is just boils down to the bravery behind the motive for cross-dressing, shouldn’t Sir Percy’s daring old lady disguise to get past the guard be taken just as seriously as a daring heroine riding off to battle? Is it just me or do other people find that they tend to automatically assume it’s a bit comic when men disguise themselves as women, particularly old women? Are there examples of unfunny men dressed as old ladies that I’m just not aware of? Or of women dressing as old men for comic effect? * One of the things I love about Sir Percy Blakeney is that he really seems to love his adventurous heroics. He is not at all dark and brooding about his mission to rescue people from the guillotine. Any angst he displays comes only from the difficulty of keeping up the appearance of not being in love with his wife, even though he really is but cannot stand to let anyone, especially not Marguerite, know this because he mistakenly believes that she betrayed the St. Cyr family, leading to their execution. One of the best romantic plotlines ever. 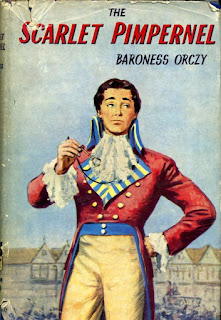 Posted by Debbie Cowens at 6:03 PM

Yeah, there's a Pantomime Dame, Drag Queen, Wolf-as-Granny thing to a man disguised as a woman if there's a gown involved. So I can see it. I kinda lost the funny of it last year - had a workmate/friend, a transgender woman in her fifties, who copped a LOT of "man in a dress" flak because she wasn't traditionally pretty. And I think a lot of what made people think it was okay to do that was the comedic tradition, as well as a sort of "ahah, you see how clever I am for figuring it out!" thing.

I think there's a big difference, though, between a Bold Hero known for disguises donning a gown, and someone quite seriously trying to pass (the later years of Patrick "Pussy" Braden in Breakfast on Pluto, for example, when he'd gone past a bit of glam and glitter and wore housecoats and switched pronouns). Pussy (renamed "Kitten" for the recent film version) was a character with a lot of comedy, but her gender identity wasn't the main source of it :).

Part of the comedy of a man disguising himself as an elderly woman is, I think, a consequence of how we view the elderly. The demure, sweet, conservative, kindly little old woman... who then takes out the guard with a roundhouse kick to the face :). It's comedy of the expectation/surprise variety. Or a character we know to be pretty crass and rough making an effort to be polite and sweet, that kinda thing.

Oh yeah, I can see how the whole assumed humour of 'guy in dress' thing would be really obnoxious for transgender people and their friends and families.

I think you're right about the rather condescending stereotype that old ladies are harmless being part of the tradition of men dressing as old women for a laugh.

Here's an un-funny man-as-old-woman for you: Norman Bates dressed as his mother and killing young women!

Intersting take on cross-dressing and the great divide that exists between men and women. In this case, I think women get the upper hand. I'll take bravery over comedy any day!

Oh yeah. How could I forget Norman Bates? *Slaps forehead*

Seriously creepy and totally not funny.