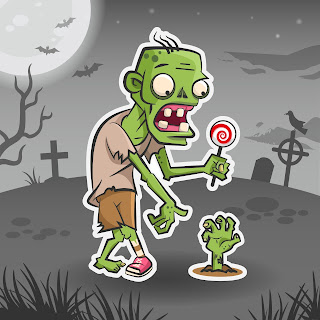 Like a decaying zombie rising from the grave, I stumble towards you on my fetid limbs to groan incoherently at the surrounding world. Despite this grim yet trendy undead imagery, the explanation for my unplanned absence from the blogsphere is nothing macabre or unpleasant, or indeed, my actual death. Those of you who were under the impression that this was in fact a message from the afterlife may now breathe a sigh of relief (or disappointment, depending on your feelings on the matter of my untimely demise/supernatural resurrection). I have not lifted any painted veils nor returned from bright lights at the end of dark tunnels to inform of what lies beyond. I have merely been busy with lots of enjoyable holidays, spending time with family, writing, and various other excuses for neglecting the internet. The holiday is now over and so the time for such wanton behaviour has come to an end. As such you can now expect sporadic updates on scintillating subjects such as what I read/wrote on my holidays, what I’m doing now, what I should be doing now but aren’t and as well as any other spurious, sloppily constructed musings I have on various random topics that crop up. Should you prefer to continue under the misapprehension that I have in fact passed on, and that this blog is now written by reanimated corpse (who surprisingly has retained the ability to type) or a cyber-savvy poltergeist, be my guest. I shall endeavour not to ruin the experience by posting daily pictures of myself holding up current newspapers whilst hooked to an EKG monitor displaying a suspiciously sprightly heartbeat.
Posted by Debbie Cowens at 6:06 PM

Alas alack, the end is upon us!

Good thing there are more holidays coming up 10 weeks :-)

You could totally have photoshopped that picture! ;)

Darn... I was looking forward to reading "Holiday attractions in the Underworld. Ten top destinations to visit when you die"

Giffy - Yeah, even a zombie can phtoshop these days.

Karen - Hmm, that what make a interesting travel guide. Maybe I rejected this blogging from the afterlife notion too quickly. :-)