A not-so-simple act of charity

I was struck with a moment of stomach-tensing anxiety at the supermarket yesterday* when my young son bounded towards a couple of charity collectors. I was not, as I have been on previous occasions, bereft of cash. Nor did I wish to curb my young toddler’s commendable enthusiasm for philanthropy, although I suspect he is more motivated by the pleasures of posting money in plastic buckets and receiving stickers than any magnanimous impulse to give generously to charitable causes. What vexed my neurotic heart as my bouncing boy dragged me towards the collectors was that I hadn’t the faintest idea what charity they represented. I could see no posters nearby, no recognisable logos or emblems that I could make out as I hurtled towards them at the astoundingly fast sprint of two-year-old who has spotted stickers ahead. I was seized with a chilling fear as a barrage of worrying questions descended upon me. What if it was a charity I did not wish to support? I couldn’t very well go up to the ladies, check out the cause and then walk away without giving money. Were there charities that raised money for truly awful things? Could there be ‘evil’ charities? The Destroy the Rainforest Trust or the Support Battery Farming of Impoverished Orphaned Children Fund? Would it in fact be nearly as bad to donate money to a cause that was not inherently bad, but not something I feel I should give money to in comparison to the huge number of worthy causes out there? Was it wrong of me to think that there were unworthy causes? Surely there weren’t any such thing as evil charities or even slightly morally dubious charities. In fact it was pretty despicable of me to put myself up on some moral pedestal where I was the arbiter of which charities were worthy of donation and which weren’t. Even if they were the Save the Endangered but Hideously Ugly Spiders Fund, they were still doing something that made the world a better place. However unpleasant I find spiders, they fill a niche in the eco-system and their extinction could bring about more serious problems than my suffering a nasty shock every time I discover a scuttling eight-legged arthropod in the shower. Luckily I reached the charity bucket before I had an aneurism and discovered that it was the ‘Flash of Light’ St John’s Ambulance appeal. Quite a relief. Dominic posted the cash. He was rewarded with a sticker and me with the peace of mind of knowing that had I given to a clearly good cause. Besides, I may well have need of St John’s services when my neurotic brain implodes if the Save the Spiders Fund ever decide to have a collection outside my local supermarket. *Rather than ‘at the superday yestermarket’ as my groggy fingers just typed 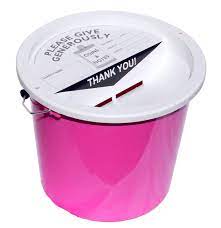 Posted by Debbie Cowens at 1:50 PM

They're spirits really take over, don't they? Sure, it was stickers that drew him in, but another great opportunity to talk about altruism and charity.

Love your neurotic side. We all have that side!

Indeed, and a pleasant change from the daily parenting opportunities to talk about the need to eat vegetables rather than use them as solely as a squishy means of artistic expression on the floor.

Glad to hear that my neurotic side is not alone in the world. :-)

I get bombarded by charity requests every day here in Mexico and everyone seems to need it. Agh, what does one do?

By the way, I have an award for you on my blog.

Yeah, it is tough when there so many good charities that you want to support and a finite amount of money you can spare. It's one of the many ways in which I life would be simpler if had a limitless supply of cash.

Thanks for the blogging award. :-)

Yeah... I think there are definitely morally dubious charities... I try to avoid giving money to religious charities with whom I have moral differences (*thinks Sallies*) but will still give food their food-banks since that way I am not (so much) helping them spread sexist, homophobic, anti-fun-consensual-sex, narrow-definition-of-family messages... But even that was awkward when Tom spent half an hour mesmerised by their band at Christmas and they played Jingle Bells and Rudolf especially for him... in that situation I decided it would be kind of rude not donate!

As a child I was oblivious to the fact that Salvation Army were actually a church, not just a chain of second-hand stores who also collection bins for clothes and food banks. Even now I find it hard to fully think of them as a religion. It's like trying to imagine a Holy Church of Woolworths for me.

There seems to be a weird conceptual gap fixed in my mind between the charity side of the organisation and their actual religious beliefs so if I donated to them I wouldn't feel like I was necessarily supporting the promotion of their doctrine - although I might now that you've made me aware of it. I suppose it's a strange side-effect of the power of unconscious branding.