Struggles with the simple act of photography

A couple of weeks ago the guilt of shamelessly passing off the same old author photo of my 31-year-old self as an accurate depiction of my 32-year-old self became too great and I resolved to update my author pic. As so many purveyors of moisturisers frequently tell us, the ubiquitous 'seven signs of aging' are relentlessly assaulting our complexions so I assumed that 365 days of the onslaught was bound to have done some considerable damage.

My plan to sneakily get a quick photo or two taken while the rambunctious toddler was distracted by the epic masterpiece Kung Fu Panda nearby turned out to not be as smooth an operation as I had hoped. As soon as he spied the camera he understandably assumed that his doting parents were desirous of more photos of him to add to their ridiculously vast collection of Dominic-themed photography. An obliging chap, he immediately donned some green marker warpaint to accentuate the marmite-stained top and hurried over to join in.

While we did get some lovely candid shots of a messy Dom rather than a cleaned up for the purposes of photography version of our son, we also ended up with the following shots of us together: 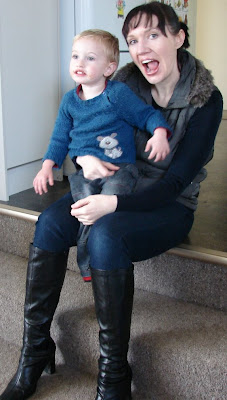 A chilling representation of Goofy Face Syndrome (GFS) wherein the presence of a cute child compels the mother or father to pull embarrassing faces or make silly noises thus making them appear a total idiot in any photo. 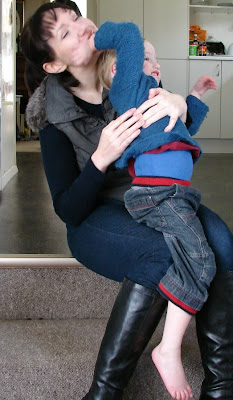 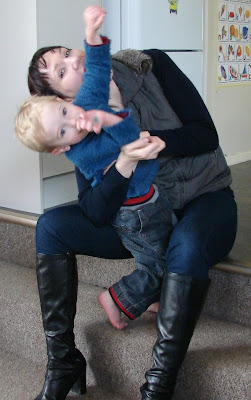 A wild lunge to the side to add dimension and a sense of movement to the photo-shoot. 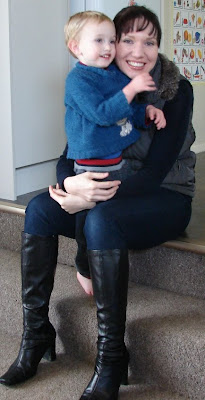 Yay! A photo where we're both smiling and (sort of) facing the camera, and only one of us looks squinty and a little drunk.
Posted by Debbie Cowens at 1:47 PM

Debz, you are looking gorgeous, GFS or not ;) You are totally rocking the skinny jeans and high boots look!

Gosh, thank you very much. *blush*

I was a somewhat late and nervous adopter of the skinny jeans thing. It was pretty much forced upon me by cheap clothing stores not having any other styles of jeans around to buy. They still make me worry for no real reason other than the word 'skinny' being involved. That's usually a bad sign in food, drinks or clothing.

It's always fun taking photos of the family :-)

And as is hopefully shown in my new profile pic, fun being the subject of a photoshoot too!