(Inspired by Johnson’s dictionary’s definition: Vaticide - a murderer of poets) SCENE 1 EXT. outside a grotty downtown apartment, late at night. DETECTIVE BUNSON has just arrived on the scene to join her partner, DETECTIVE STIBLER. They talk as they make their way up to the victim’s apartment. STIBLER Sorry to drag you out here at this hour. I know this was supposed to be your night off from solving horrific crimes. BUNSON It’s part of the job. I knew what I was signing up for when I joined this unit. You said you were sure it was vaticide. Did the killer choke the victim on pages of their own verse? STIBLER Like that Sonnet serial killer? It still chills me to think of those poets’ dead faces, forced to eat their own words. BUNSON Death by iambic pentameter. Not a nice way to go. STIBLER The press were all over it. Calling him the ‘Shakespearian Sonnet Slaughterer’ when he killed writers of Petrarchan sonnets as well. They’ll stoop to anything to get an alliterative headline. BUNSON But it can’t be him. We put that poet killer away for life. You’re not suggesting a copy-cat killer? STIBLER No, the victim was stabbed, not choked with poetry. BUNSON Stabbed? With a writing implement? STIBLER No, a knife. BUNSON Why are you so certain it was vaticide then? STIBLER You’ll see. BUNSON and STIBLER arrive at the open front door. They duck under the crime scene tape across the doorway as they step into the apartment to observe the scene. A dead body lies in the middle of the floor in a pool of blood with numerous stab wounds in his torso. BUNSON Maybe he just interrupted a burglary? STIBLER Look at the floor over there. BUNSON My god. The victim scrawled out a message in his own blood: ‘There was once a man from Nantucket.’ STIBLER Definitely the first line of a limerick. BUNSON You’re right. He even used his kidney as a comma at the end of the line. STIBLER I’m not sure that was intentional. BUNSON What do we know about the victim? STIBLER One Edgar Wilkes. Single, white, twenty-eight years old. Worked as a sales rep at the Bargain Electronics store. No publications that we can find. A lot of poetry and literary journals on his bookshelves though. BUNSON Sounds like he had a serious poetry habit. Reading as well as writing the stuff. Were there any witnesses? STIBLER They’re interviewing the neighbours now but it seems no one saw or heard anything. It seems our poet liked to keep to himself. BUNSON The reclusive type, huh? STIBLER Aren’t they all? BUNSON Let’s not generalise. If my four years on the Vaticide unit have taught me anything, it’s that poets come from all walks of life. Some of them you wouldn’t even know from looking at them that they spent their evenings up to their eyeballs in frantically scribbled verse. STIBLER You’re right. They’re people, too. They all had hopes and dreams and families before their lives were cruelly stamped out by some poetry-hating psycho! BUNSON Take it easy. Let’s just find this killer before they strike again and take out another limericist. We don’t want another Haiku Hacker on our hands… STILBER Killing five poets one night, seven the next… BUNSON And five on the last. We should investigate. STIBLER I’ll just call my wife, this could go late. BUNSON Careful, Stibler. You just rhymed with me and that could sound dangerously close to poetry. STIBLER You think the killer could be listening? BUNSON You know what they say about killers. They always return to the scene of the rhyme. 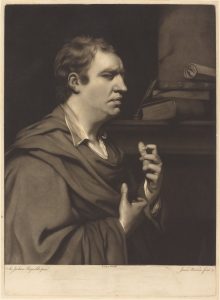