I’ve just finished ‘Rudyard Kipling: Twenty-one tales’, an anthology selected by Tim Wilkinson. I can’t say that I envy Mr Wilkinson the task of selecting only a handful of Kipling’s stories out of such an enormous and diverse body of work. As Somerset Maugham pointed out the qualities of a great short story can be found ‘in Kipling’s stories when he was at his magnificent best; and this, happily for us, he was in story after story.’

This collection includes the obvious greats such as ‘The man who would be King’ and ‘The Elephant’s Child’, and also a couple of other amazing stories I hadn’t read before such as the brilliantly unsettling ‘A Madonna of the Trenches’ and the creepy ‘In the House of Suddhoo’. One of the most impressive features of Kipling is not merely his mastery of such a variety of different styles and genre, but that fact regardless of whether it’s one of his Just So children’s stories or a tale about India or soldiers remembering the horrors of trenches, the distinctive voice of Kipling rings through every sentence. As a reader, you always feel aware that you’re reading Kipling, partly because you’re holding a book with Kipling written on the cover, but also because there is something very rich and personal about the way he uses language.

My love of Kipling stems back to my childhood. My grandparents had a beautifully illustrated kids’ book of the Rikki-Tikki-Tavi story at their house. It’s a wonderful tale about a fearless mongoose, saving the family who adopted him from the attacks of a pair of wicked cobras (Nag and his wife, Nagaina). It’s a fast-paced adventure story with a cute, furry hero. As a child, I considered this one of the most mind-blowingly brilliant stories ever. It also desperately made me want to have a pet mongoose (not that I had much need of cobra-protection in New Zealand).

The mongoose became fixed in my mind as one of the most appealing animals ever, not just because of cute pictures in the book, but also because of the following passage, describing them in the story:

“It is the hardest thing in the world to frighten a mongoose, because he is eaten up from nose to tail with curiosity. The motto of all the mongoose family is "Run and find out," and Rikki-tikki was a true mongoose. He looked at the cotton wool, decided that it was not good to eat, ran all round the table, sat up and put his fur in order, scratched himself, and jumped on the small boy's shoulder.”

I still think that ‘eaten up from nose to tail with curiosity’ is one of favourite animal descriptions ever. And I still want a pet mongoose.

I think I also loved Kipling as a child because when I was about seven there was a joke on The Muppet Show, during one of the ballroom sketches where one muppet asked their dance partner, ‘Do you like Kipling?’ and the other muppet replied, ‘I don’t know. I’ve never Kippled.’ This is the first clear memory I have of ‘getting’ a literary in-joke and I was really chuffed with myself. That pretty much signed me up for a lifelong fandom of Kipling. He wrote Rikki-Tikki-Tavi and there was a joke about him on The Muppets. Genius.

As the years went on, I kept encountering Kipling, and my love and appreciation of his work grew. I could write a whole blog post on the excellence of ‘The Jungle Book’, but it’s specifically the story of ‘The Elephant’s Child’ that is foremost in my mind at the moment, having just re-read it.

The ‘satiable curtiosity in the title of this post is indeed a quote from ‘The Elephant’s Child’. The story is one of the many excellent Just So stories which are sort of like Kipling’s version of origin myths about animals. If you haven’t read them, I highly recommend them. They’re up on project Gutenberg here if you’re interested.

The first thing that struck me about ‘The Elephant’s Child’ when I re-read it was how much spanking there was. At the start of the story, it seems like every relative the elephant’s child has is spanking him as a punishment for all his curious questions. It’s all rather brutal. I didn’t remember that aspect of it at all from when I read it as a kid. When the elephant’s child asks his family, ‘What does the crocodile have for dinner?’ they respond by hushing him and then ‘spanking him immediately and directly, without stopping, for a long time.’

However, the curious elephant’s child cannot be deterred and he heads out post-spanking to find out what the crocodile has for dinner. He gets some directions from the Kolokolo bird and then encounters a bi-coloured python who after a brief conversation spanks the elephant’s child with his ‘scalesome, flailsome tail’.

When the elephant’s child finally meets the crocodile to ask him what he has for dinner, the crocodile grabs hold of his short nose. The elephant’s child pulls and pulls away and as he does so he stretches his nose out into a long trunk. At first the elephant’s child is mortified. He wraps his stretched nose with banana leaves and waits for three days for it to shrink, but it doesn’t. Finally, he heads home and along the way he discovers that his long trunk is useful. He can use it to swat flies on his shoulder, pick grass and schloop up cool mud to trickle behind his ears when it’s hot. More importantly, when he returns home and his family are eager to spank him for his ‘satiable curtiosity, he sets about spanking them with his long trunk. In fact he ‘spanked all his dear families for a long time, till they were very warm and greatly astonished’. The other elephants decided to go and get long trunks from the crocodile as well and then no one spanks anyone anymore.

The most surprising thing about re-reading the story though was not the abundance of spanking so much as the ‘moral’ of the story. My recollection of the story was that it was simply a tale in which the main character was punished for being too curious by having a frightening encounter with a crocodile and getting their nose stretched. However, that simplified reading of it doesn’t really fit. There is something quite admirable in the elephant’s child’s relentlessly inquisitive nature and that the fact that he continues on with his quest despite punishment is presented as both determined as well as foolhardy. The stretching of the trunk whilst distressing for the elephant’s child ultimately becomes advantageous. I don’t think that the elephant’s child is clearly punished or rewarded for his ‘satiable curtiosity.

I suspect that Kipling, like many writers, can’t bring himself to wholly condemn curiosity as a character trait. Certainly, there are many tales in which inquisitive characters get into trouble but it’s seldom presented as irredeemable fault. Maybe it’s because curiosity is an intrinsic part of human nature. Curiosity can be dangerous, but it’s not something that can or should be suppressed. It’s the driving force for most human endeavour and without it we’d all still be living in caves and wondering, or rather failing to wonder, when some curious person would hurry up and get around to discovering fire. Curiosity might kill the cat, but it’s vital for the mongoose.

I also suspect that writers are by necessity curious creatures. At the heart of every story lies a question. It’s the desire to explore these questions that compels people to write.

I’d like to think that a writer, like the loveable mongoose, should be eaten up from nose to tail with curiosity. 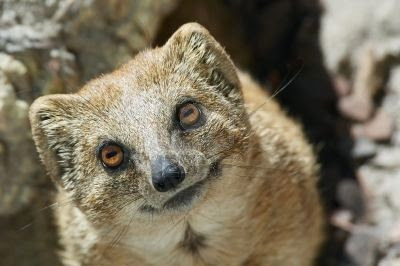 I think I need to reread me some Kipling. I *love* Rikki-tikki-tavi.

I used to love the phrase "great grey-green greasy Limpopo river" and when we learnt about alliteration in 4th form I thought it was pretty cool that I already knew an example...

I think spanking was less notable when we were children... possibly even seemed to me like a normal response to an annoying child :-) But reading your description and remembering the story better, I'm getting the impression that Kipling didn't think it was particularly effective way to improve behaviour :-)

You'd think curiousity would be a desirable characteristic for scientists too... but our society doesn't exactly reward curious scientists

Giffy - Rikki-Tikki Tavi is indeed most awesome. Just think - soon you'll be able to read it to the wee one as well!

Karen - Yeah, I would have thought that curiosity was definitely a good thing for scientists, if not essential.

Just wanted to point out that this story has now been Bowdlerized; the version currently in print has had all the spanking taken out of it. I kinda thought that was the whole point. When I heard my wife reading to our kids "Take your nosy nose somewhere else!", I immediately exclaimed "That's not Kipling! What on earth are you reading there?" Looked over her shoulder at her Nook, and said "Agh, they've censored that. Let me read you the real Elephant's Child." Went straight to Gutenberg and pulled up the original text: my kids enjoyed it immensely.

I hate when classics are tampered with. My all-time favorite line, which unfortunately was not in the revised edition: "The next day, when there was nothing left of the Equinoxes, because the precession had proceeded according to precendent..." Sure the kids won't get it, but the adult reading to them needs a laugh too, once in a while.