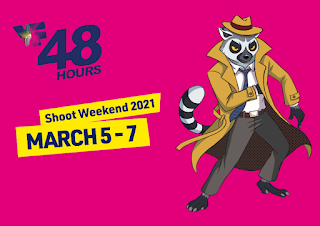 The weekend was a tremendously fun and exhausting one for me as I once again sallied forth into the sleep-depriving joys of the 48 hour film competition. This year I was lucky enough to return to the Jenni’s Angels team, a group of wonderful people whose guerrilla film-making talents can only justly be compared to the delicious catering they provide. In between gorging on chocolate, delightful lasagne and breakfast cake, I was also involved in some the film-making action. I got to be an extra in a nightclub scene, which involved jumping as though we were dancing without any music. This is a rather surreal experience but oddly very enjoyable as well. In fact, when you remove the ear-bleedingly loud music and unpleasantness of excessively drunk strangers standing on your feet as they jostle past, dancing is vastly improved in my opinion. Still, I must confess that after an hour or two, I was starting to get rather tired. Thankfully I was wearing comfortable shoes as fake dancing in heels would have been murder. However, the experience was intoxicatingly enjoyable, filled with humour and good cheer. I also played one of the commentators in the film which was also fun. I hopefully managed to get out most of the lines, or at least vague approximations thereof, in an adequate manner but I fear I was rather shouty and awkwardly tongue-twisting through the performance. I don’t credit myself with much in the way of extraordinary talents but if you want someone to stutter through mispronouncing words at a curiously loud volume whilst pulling cheesy exaggerated facial expressions, I’m your girl. I suspect I shall be entirely outshone by my charismatic co-star ‘Skip McDoole’ but that’s as it should be. The writers had done a terrific job, the two lead actors were great and impressively stunt-tastic in their fight scenes, and I know the post-production team are excellent at what they do, so I’m confident that the film will be great. It is always a pleasure to be in the presence of a collection of impressive talents that are housed in lovely, cheerful people who are such fun to be around. A weekend spent laughing, joking, eating, fake-dancing, blathering at a camera, making new friends and spending time with old ones is perhaps one of the most delightful ways to become utterly exhausted. Hopefully by next year my weary body will have recuperated enough to do it all again.
Posted by Debbie Cowens at 6:58 PM

Jellus! Hopefully next year I'll be up for joining in :)

Yeah, yeah, yeah! You should definitely try to do it next year as well. That would be awesome.

It was awesome to have you back on board and thanks for saying the writers did a terrific job :)

It was great to return to the group and doing the 48 competition. I can't wait to see the film on the big screen tonight!