The truth about Simon Callow

Yesterday I made the appalling blunder of mixing up Simon Callow with Simon Cowell in my blog post. This was of course a most cruel and unfair case of mistaken identity. Simon Callow is a wonderful actor and someone who should never suffer the galling indignity of being confused with the monster responsible for manufacturing boy bands and reality TV shows. Indeed, I was convinced that Simon Callow was not only a talented and accomplished thespian, but probably also a charming gent who brought nothing but sweetness and light to the world. However, my research has led me to discover otherwise.

Could it in fact be that Simon Callow is not as harmless as he first appears? Read on, if you dare… 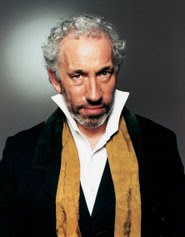 1. Four Weddings and a Funeral. Simon Callow’s character was easily the most likeable in the entire film and had no business dying halfway through the film merely to provide the funeral required by the film’s title. I would have cheerfully exchanged the lives of two or three of the other characters in exchange for his, though probably not Kristin Scott Thomas (and Hugh Grant was a fool and a moron to prefer Andie McDowell to her but that’s another rant)*.

2. The local population of squirrels and hedgehogs plummeted the year that Simon Callow was accepted into Drama Centre London. It is believed that he, like many other aspiring actors at this time, participated in occult rituals, involving blood-sacrifices of cute little animals, to secure his place in the school.

3. Whilst he has appeared in the notable Merchant Ivory adaptations of Forster’s ‘A Room with a View’, ‘Maurice’ and a had cameo role in ‘Howards End’, he has outraged E M Forster fans by repeatedly urinating on the renowned author’s grave and insisting that he hasn’t even bothered to read ‘A Passage to India’.

4. During the filming of the Doctor Who episode ‘The Unquiet Dead’, he savagely mocked the acting capabilities of the other cast members. Christopher Eccleston was so upset by one of Callow’s vicious taunts that he ran off to his trailer to have a cry. Filming of the episode could only continue when Billie Piper coaxed Eccleston out, promising to do her ‘happy’ dance for him if he was a brave boy.

5. Simon Callow did have plans to form a boy band with fellow Brit actors Patrick Stewart, Ian McKellen and Stephen Fry, however, his violent temper soon caused friction when they came to discussing which Evelyn Waugh novel to allude to in their band name. Callow was set on ‘Vile Bodies’ whilst it is believed that Stewart preferred ‘A Handful of Dust’ because he thought it was a better book. Allegedly, Callow became so outraged on the subject that he brutally attacked Stewart with an electronic keyboard. The assault led to the break up of the band and Fry went on to direct ‘Bright Young Things’ the following year.

* I recommend mentally working out the preferential order for characters to be knocked off when watching romantic comedies. ‘Love, Actually’ is vastly improved if you watch it imagining that it’s a survival horror movie, and that it’s not Christmas approaching, but a brutal, gory apocalypse. In my version of the ending, it’s just Emma Thompson, gripping a blood-soaked axe, and the kid in the lobster costume that survive to emerge from the horrific massacre of the school concert.
Posted by Debbie Cowens at 1:10 PM

I want to see the reality TV show that follows the rise, disintegration and fall of Simon Callow's boyband.

Maybe in a few years the band members can VO their CG younger selves...

Awesome. I'm keen to share my views on the bits where the various characters have actually died horribly and then, somewhat surprisingly, continue to lumber their way through touching and/or romantic plotlines despite being undead.

I want Liam Neeson to survive Love, Actually as well. He is the one who has to deal with death first after all, so he'd be prepared. Also, he's badass.

Liam is pretty tough. Maybe he can beat his way out of the airport (which has been overun with zombies at the end), using only a small child's plastic suitcase that he grabs of the nearby baggage carousel.