Now for some scathing reviews... 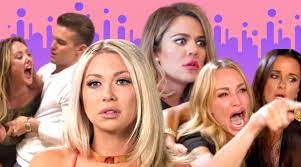 Continuing on with my current trend of veering wildly from one inconsistency to the next like a drunken lunatic behind the wheel of a dodgem car at the fair, I thought I’d do another review-based post. Although I thought this time I’d opt for the more reliable mode of the popular critic by slagging things off. Fear not though if you have concerns that this will lead me to conform to the generally expected codes and conventions of reviews. I flatter myself that I shall be adding a more unpredictable flair to my criticisms by only reviewing TV shows that I haven’t actually seen. Such an exercise may seem remarkably pointless at the outset. Why should anyone bother to read a review about television shows that even the reviewer cannot be bothered to watch? How can anyone get that incensed over a subject on which they are so blatantly ignorant?* Now is a time when the world seems to be facing an appalling number of crises. On the global front, the constant barrage of troubling news about the environment, the economy, poverty, diseases and international conflicts mean that your daily intake of current events is about as cheerful as your average Dostoyevsky novel. On a national level, things aren’t any better. The government seems to have taken to introducing nasty-minded policies with all the moustache-twirling glee of a dastardly villain in a Victorian melodrama, hastily tying national parks and beneficiaries to the train tracks and then gloating at us all with maniacal laughter. In times like these, our days are incredibly stressful. Worrying about the ever-increasing tower of problems and injustice, writing strongly-worded emails to MPs and joining all the Facebook protest groups is exhausting. At the end of our days, kiwis should be able to switch on the TV and find some relaxing escapism from the terrifying levels of impending doom and destruction. Television may not be much more than valium for the masses, but if there has ever been a time when everyone deserves a pleasant hour or two of self-medicated numbness from the misery of real life, it’s now. That’s why I find I am compelled to wail and moan about that most despised of television: Reality TV. I know, I know. Surely, everyone on the internet has already mocked and criticised Reality TV. It seems like a lazy target, like I’m kicking the wheezy, unpopular kid at school when they’re curled up on the ground having already been beaten up by bigger, tougher bullies. I don’t want to be the inept wannabe thug who gets a kick in only after everyone has had a good go, but I fear that on this occasion, I might have to be. Reality TV has really annoyed me. It’s broken my pencils and stuck chewing gum in my hair one too many times. I can’t resist the urge to give it a kick in the shins now, even though it’s a hardly a fair fight. I should mention that I’m not opposed to the idea of Reality TV in itself. In fact, I think the first series of the first show of any particular concept** is probably interesting enough to watch. After all, there’s heightened human conflict and drama between the contestants, the additional element of competition and suspense, and often a pretence that they’re giving us insight into the ‘reality’ of surviving on an island, running a restaurant, becoming a famous singer/model/designer/performer or successful business person. Of course, it’s all so artificial and staged that we’re all abundantly aware that the ‘reality’ show is no more of an accurate representation of the actual reality than the experience of watching an episode of ‘Wheel of Fortune’ is like using a dictionary. My biggest gripe with Reality TV is the sheer amount of repetition there is. I fear this is a common enough complaint, but surely we New Zealanders are afflicted with a far worse time of it than other countries. What seems unaccountably cruel is the obsession TVNZ broadcasters have with screening countless series of international versions of a show for a year or two before forking out cash to buy the format and then making a NZ series of the idea as well. This is a particularly vicious form of evil. We’re expected to endure the American, then the British, then the Australian versions of the same show, each with diminishing budgets and production values, and then, to add insult to grievous injury, they make the NZ one, which is unfailingly the cheapest and blandest of the lot. Shows like ‘The Apprentice’, ‘
Posted by Debbie Cowens at 5:42 PM

I agree with the point of your review most wholeheartedly, but can people please stop confusing the rather lovely Simon Callow with the execrable Simon Cowell. This is the second blog I've read where the writer has done this. To be fair, I haven't watched any reality tv recently, but I'm pretty sure that Simon Callow has nothing to do with any of them.

Oops. I have corrected this error. I feel horrendously guilty and like I should write an apology letter Simon Callow. Can't think of anything worse for a chap than to be mistakenly confused with Simon Cowell.

I'm surprised it's happened before. It seems a particularly egregious typo. I blame sleep deprivation or lack of caffeine or something...

As a professional modeller I was shocked to discover that there wasn't a single differential equation in "America's Next Top Model". The contestants all seem to rely on self-validation and the error analysis is superficial to say the least.

Heh. Maybe we should cobble together a pitch for 'Palmerston North's Next Top Modeller'. :-)

IIRC, NZ is actually to blame for the Idol format - whatever the show was called that produced True Bliss was first, then the UK's Pop Idol, then the rest followed. We have a mutual friend who had some involvement in the NZ version, but I believe I'll grant her name suppression :).

Other than that... yes. I do have a weakness for reality tv formats that involve people with an actual skill - Project Runway is my chocolate-coated-crack.

I'm not sure which is worse, though - the shows that follow someone around while they go through the skull-grindingly-dull minutiae of their every day life (Gene Simmons, Hulk Hogan, Ozzy Osbourne, for example) or the almost farcical shows like Rock Of Love Bus, where skanks compete to see who'll be allowed to officially shag the hat-wearing singer from Poison or... something about teaching women how to come across well on a date, or guys disagreeing with their mothers about girlfriends. I don't know. There are a lot of ads for these shows on C4 and they all get muddled together.

I might watch a show where rock groupies compete for boob-jobs by singing whilst wearing clothes designed by their boyfriend's mother, all the while negotiating an obstacle course in the jungle which includes the choosing, cooking and presentation of a meal to make the gods weep in ecstasy. Yes?