I was a little miffed by a comment left on the first part of my story The Maze. I suppose really it was more disappointment than anything. Whenever any writer stumbles upon some commentary on their prose, their heart skips a beat and they find it hard to resist the urge to read it. Of course this isn't entirely wise. Writers can be sensitive creatures, and censure can wield a disproportionate power over the fragile and temperamental ego of the Artiste. However, attention of any kind is far too appealing and praise is always gratifying so the risk of mortification is all too often ignored, and I jump upon any comment with the rapacious enthusiasm of a starving Labrador going after a jam doughnut. However, I found that I was a vast deal more confused by this particular comment than I was offended by the lack of kind words. I was able to discern that they probably hadn’t liked the story but other than that, the comment left me as bewildered as a wasp who has inadvertently stumbled into a beehive only to be ordered by the queen to hand over the pollen and start making honey. The reference to the reader ‘not connecting to the old lady’s story’ threw me at first, largely because there wasn’t an old lady in my story. The comparison of my story being similar to thousands of other stories about war and waiting for loved ones was likewise troubling. Again, I felt that this was a tad unfounded, seeing as there was no war, well, not a literal war at any rate. Then it occurred to me that this was my problem in trying to come to grips with the comment. I was being overly literal in my reading. Clearly, the criticism was operating on some deeper, more symbolic level. The old lady might be a figurative term for any character of any age or gender. Perhaps the term war was likewise being employed as an insightful metaphor into the conflicts and struggles of any narrative, or maybe even more profoundly, life itself. I felt a little relieved at this prospect. Whilst the person hadn’t appeared to show any fond regard for my story, it had clearly led to some fairly inspired contemplation on literary tropes and the resulting disconnection between reality and fiction caused by overused narrative conventions. I didn’t understand much of their despair, but felt proud that in my own small way I may have helped the reader to come to the realisation the widespread literary domination of stories about old ladies and war has now reached such towering excesses that even stories that don’t feature old ladies and war are still rehashing the all-too-familiar clichés of old ladies and war stories. “When,” the reader may well have asked themselves with an impassioned cry, “oh, when will someone finally have creativity to break free from this confounded trend of old ladies and war stories? Oh, how I yearn to read a truly original tale about a young boy baking tea cakes?” However, the last line of the reader’s comment proved to be the most vexatious of all. “As for the ending, I think it was more of a good-bye to Rio above all else, although it was left pretty wide open to interpretation.” This time, I had no idea at all what my stern-hearted critic was on about. Perhaps the biggest source of my confusion was that it had been pretty clearly labelled that it was in fact only the end of part 1 of the story, and there was also a hasty reassurance that part 2 would soon follow. This could be my sensitive artistic temperament raising its defensive head again, but I think it’s pretty harsh to call someone’s ending a ‘good-bye to Rio’ when you haven’t even read it yet. Still, at least I could take some consolation that someone had read my story and taken some time to collect their thoughts and write a considered response. Was it not spoilt and pernickety of me to be aggrieved merely because I didn’t like their criticism? Then I discovered that the comment was actually spam. Yes, the most vocal and outspoken reader I have is a spam-bot. The comment was originally written about some Anime show, if google is to be believed, but now it makes its way onto comments section of many a story. A handy reminder to not be too proud. However insulting you may find the criticism you receive, it’s not the most belittling experience you can suffer. No, the most humbling insult of all is finding out that you were critiqued, somewhat harshly, by spam. 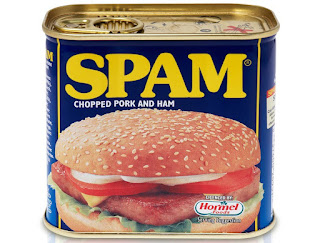 In this case it's not even apparent that the spam-bot read your story! No hastily cobbled together keywords lifted from the text were used in the creation of the somewhat oblique critique, no names mentioned, just a cut and paste from another (presumably human and, in context, intelligible) comment.

I shall keep my eyes peeled for a higher quality of spam-bot, to whom I can recommend stories :-)