A few days ago I remarked that I would love to read a character that embodied all the humorous, earthy foibles of Falstaff with the insightful genius of a Sherlock Holmes style detective. It seems difficult to imagine how to marry the elements of the cowardly hedonist and the determined sleuth, but I really wanted to see it work somehow. A greedy, self-interested, lustful detective who was a physical coward but had incomparable understanding of the human, especially the criminal, mind.

There have of course been fictional detectives whose possess many of these qualities, but they're often more like self-destructive addicts or tormented outcasts than irrepressible scoundrels.

To my surprise, I discovered that the figure I was after did exist, not in fiction, but in history. His name was Thomas De Veil.

I came across him in a slightly tangential piece of research about Henry Fielding. I have long admired the literary works of Fielding since first encountering Tom Jones at university, but I was surprised to discover recently that he had later become a magistrate. It seemed an unlikely career shift given his satirical portrayals of trading magistrates, but apparently when some of his works ruffled the wrong people, making a living as a writer was no longer feasible.

As a magistrate Fielding established the Bow Street Runners, England’s first professional police force, consisting of eight constables, in 1749. They were not a police in the modern sense of the term, but some of the cases that were solved by the Bow Street Magistrates’ Court demonstrate investigative techniques that resemble fine detective work, and this was a century before the introduction of Robert Peel’s bobbies, the Scotland Yard detectives, and the popular concept of crime detection. 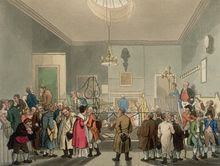 Henry Fielding’s predecessor was Sir Thomas De Veil. He established the Bow Street Magistrates’ Court in 1740 and is justifiably considered by many to be a pioneer of crime detection. There was a case he solved by matching the broken tip of a suspect’s knife with the broken off fragment that was found in a lock. It was under his orders that the fragment was found in the lock. He had anticipated its presence and significance through questioning the defendant and his casual observations of the defendant's knife.

This doesn’t seem that remarkable to us but successfully using physical evidence was rare in the 18th century, especially in cities where large populations and endemic crime meant that many cases were unsolved and convictions were largely obtained through witness statements or confessions.

Alongside De Veil’s pioneering work in crime justice sits the other side of his character - a morally dubious man. Allegations of corruption and abuse of his power were by no means infrequent. It seems that De Veil was willing to find female defendants not guilty in exchange for sexual flavours and, by most accounts, he appears to have been a rampant sex maniac. As well as his notorious womanising, De Veil also drank excessively. In his youth his debauched and hedonistic lifestyle led many to predict that he would never amount to anything. While he did attain a prominent position and his achievements were impressive, he did so without giving up the debauchery or hedonism.

De Veil is a remarkable figure in that he presents us with the intellect and instincts of brilliant detective, an influential man whose pioneering work in criminal justice was tremendous and yet he appears to have sadly been bereft of integrity. His dissolute behaviour would be benignly humorous if he hadn’t exploited his position to feed his carnal appetites. 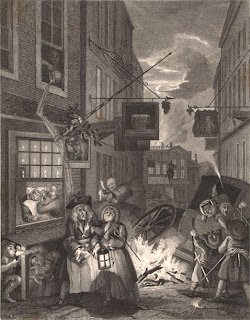 
Personally, I find it difficult to reconcile my admiration for the man with his corruption and treatment of women. If he had been simply chasing women in his free time, I’d think of him as a harmless old lech perfectly in keeping with his era. However, the fact that he either coerced desperate woman who were innocent and may have been found so in a fair trial, or allowed the guilty to go unpunished for his own gratification seems deplorable.

The fact that I find him so problematic fascinates me. I like the idea of exploring a character that I both admire and find objectionable. Normally I write characters with flaws similar to my own or forgivable, if not reparable, weaknesses.

The idea of researching 18th England is also pretty appealing. It’s the age of Johnson, Swift, Defoe and Fielding. It also the age of highwaymen, cut-throats and brutal clubs inflicting sadistic tortures and mutilations for fun.

Now I just need to find a way of cramming more time into every day so I can finish my Work In Progress before scampering off after new research and stories.
Posted by Debbie Cowens at 10:57 AM

I find myself also fascinated and would love to read any 18th century stuff you end up producing. Thanks for sharing your interests!

The combination of effective detective and sleazy opportunist is an intriguing one. Whilst I do love a heroic coward or cynical yet moral protagonist, the Falstaffian hero is a character type I'd love to see more of.

Giffy - Thanks for the comment. The 18th century is an intriguing period. I shall definitely call upon your reading services should I get around to writing about it in the future.

Creepy guy but fascinating.
Cramming is good - hope you come up with more treasures like this.

Thanks. I'm glad you liked it. Have to agree on the 'creepy but fascinating'.

you wouldn't happen to know if he was married and if so what his wive's name was?

Have been working on our family tree, and on have my wife's line(maiden name Devile) traced her ancestry back to Ricjard Deveil b.c1698 in Henham Essex UK - son John Deveile b.c1724 - gandson John Deveile b.1751. I was looking for where the name was likely to originated from and came across your site. Rather strange and spooky. My wife's brother was also Thomas Devile and was a London actor and played Falstaff a number of times. As for the womanising - well he was gay, but he was married twice - alas both for money though. So the rougue element may be a link - just maybe.
Did you ever do any further research into the debaucher?
Dan

de Veil was presumably the model for "Sir John Furnival" in Creasey's THE MASTERS OF BOW STREET (since the Fieldings figure under their real names.)