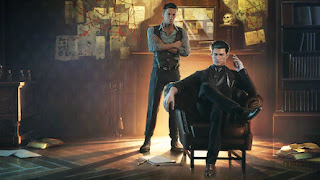 When it comes to crime fiction, I haven't generally been a big reader of short stories. In the past I have read the Sherlock Holmes stories, some of Poe's and a a few anthologies of Golden Age Detective stories. However, a couple of weeks ago I got a Ruth Rendell collection "The Copper Peacock and other stories" and quickly became a fan of the modern crime short story. Since then I've got hold of two more of Rendell's anthologies ("The Fallen Curtain" and "Piranha to Scurfy") and Ian Rankin's collection "Beggars Banquet" and devoured them with ravening delight. While some of my favourite stories have been the ones featuring Wexford and Rebus, I'm impressed at how both these writers come up with intriguing glimpses at compelling cases through different eyes - the murderer, the victim, the suspect, or the witness. Several of these stories play around with these roles so that with a deft sleight of hand they reveal at the end that you've been reading the character in the wrong role, and they were not what they appeared to be. It's a similar to the Roger Ackroyd twist, but when it's well executed, it's chilling and effective. I've also been struck at how some stories look at crime through a different time frame. Rather than focusing the investigation and the detective solving the case, they can explore the events leading up to the crime or the aftermath it creates in people's lives. One particularly chilling examle is Rendell's 'The Wink' where the main character encounters the man who raped her as a teenager decades later in an old age home. It's very inspiring to see how experts of the genre can create powerful and effective short stories, both with and without their iconic detectives.
Posted by Debbie Cowens at 4:47 PM

Hi Debbie,
Sounds really interesting and refreshing. Must add to my pile. Thanks for this.

I haven't read any of her writing but it sounds so interesting. I wonder what she does to the man in the old folks home... I guess I should read it.
CD

Thanks for the comments.

A Certain Book - Happy to have added to your reading pile. I hope you enjoy them. I found a feasting on short stories a really interesting change from my useful diet of novels and longer nonfiction.

Clarissa - I'm a longterm fan of Rendell's but I hadn't read any of her short stories until these. I don't want to give away the ending of the story but she does less than you'd expect.