Tantrum-inducing supermarkets (it's not just small children they upset)

Whilst I generally try to limit the number of times I rant about mundane annoyances, I found this morning’s trip to the local supermarket provoked such a strong sense of irritation that I think it best to vent lest the repressed ire manifests as some sort of painful ulcer. I am not about to complain about the finicky demands of the automated self-checkout system. Indeed, I almost enjoy its chirping declarations that there is an ‘unexpected item in bagging area’ every time a microscopic speck of dust lands on its sensitive metal parts. What vexed me today was the supermarket’s ill-conceived and inconsiderate rearrangement of their store layout. Perhaps I’m being unfair. Perhaps they had the purest of intentions. Perhaps the whole project was undertaken to provide their customers with the exhilarating thrill of discovery and adventure. Did they fear that shoppers might have become bored with finding their condiments in the same location week after week? Were they trying to recapture the spark of a customer’s first encounter with their store when every aisle seemed packed with new exciting possibilities and delights? Is it censorious of me to begrudge their desire to rekindle the romance and mystery of the early days of our relationship? Nonetheless, I find that I’m unable to forgive them for their revised layout regardless of their motives. If I am to believe their reasons for the alterations were to do with customer/supermarket relations, then they have not so much arranged a second honeymoon as indulged in the most maddening passive-aggressive behaviour. I realise that at first this may appear as a reactionary outburst from someone who fears change. I would like to assure you that is not the case. Change, progress and all that business is part of life. I like to think that I am a reasonably adaptable person. Indeed when change leads to an improvement, I’m all for it. What I can’t abide is messing up something that is perfectly adequate for no very good reason. Perhaps the most vexatious aspect of the new supermarket layout that has so egregiously been thrust upon me is the swapping of the relative positions of bread and alcohol. It does not strike me as socially responsible for a supermarket to enforce all their customers to weave their way down a towering avenue of wine and around vast chillers and stacks of beer to find the bread section in the dark, outermost corner of the supermarket. I mean doesn’t just about everyone want to buy bread? Even the gluten intolerant will want their corn and buckwheat loaves. What lifestyle are they trying to accommodate here? Are people supposed to only pop into the supermarket en route to a party to pick a cheap bottle of wine, a six-pack and a jumbo bag of salt-and- 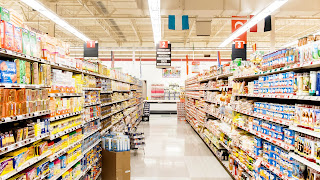 vinegar potato chips? Do they really think that the average kiwi shopper spends their life on the sofa drinking themselves into a stupor and munching salty snacks, idly dreaming of the day when they might sober up enough to make it to the distant outreaches of the supermarket so they can buy some bread and have a sandwich? No doubt I shall soon have to invest in some spelunking equipment when they decide to move their produce section to the murky depths of a subterranean abyss.
Posted by Debbie Cowens at 7:19 PM