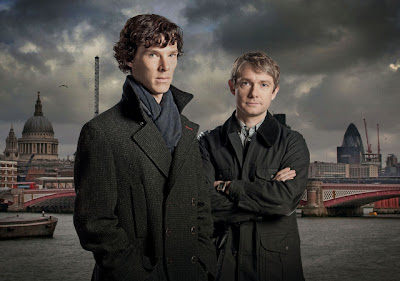 Those who know me to be an avid Sherlock Holmes and Dr Who fan will not be surprised to discover that I squealed with joy when I first heard about the TV show Sherlock written by Stephen Moffat. Those who were previously unaware of my feelings on the subjects shall have to rely on their powers of deduction (which, no doubt, are second only to those of the illustrious detective himself) to make the logical inference from the title and opening sentence of this blog post that I am quite the devotee.

Now that I am confident that the matter of my intense enthusiasm to see this show has been clearly established to the satisfaction of all, I shall come to the point of how this feverish excitement presented me with a problem. Naturally, it would require both patience and an optimistic attitude towards the tastes of those in charge of programming in NZ television before I would see Sherlock on our screens; and I found myself in short supply of both.

Obviously, the incessant anti-piracy adverts on the start of every legally purchased DVD* and trip to the cinema have persuaded me that downloading movies not only deprives the artists involved of their due earnings, it funds terrorism and nefarious villains who are so evil that they shove kittens into blenders for fun. The illegal acquisition of movies and TV would be the first ill-fated step down a slippery slope of larceny that could only result in crow-barring grannies in the head to steal their cars and mugging orphans for their lunch money.

After sleepless nights of tossing and turning, I resolved to find another solution. One that did not require patience or criminal enterprise. I would build a time-machine.

Using common household items***, I fashioned together my own inter-temporal transportation device and ventured into the near-future to a time when I had purchased the box set of Sherlock DVDs. Needless to say I watched them all and it was well worth the effort. I heartily recommend constructing your own rudimentary time-machine or, if you have the patience, waiting until the glorious future of Sherlock availability becomes the present. I also endorse the future innovation of spearmint favoured M&Ms. They are (will be) very yummy.

Unfortunately, inter-temporal restrictions**** prevented me from importing the DVDs back into our own time so that others might also enjoy them, but I can at least tell you about some of the exciting DVD bonus features. 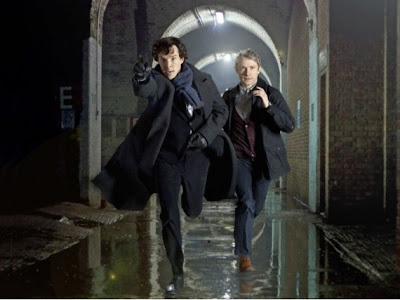 Benedict Cumberbatch as Sherlock Holmes has been the most recent actor to take up the mantle of men playing cool men who wear extremely cool long coats. This featurette explores the screen history of other cool long coat-wearing characters such as Spike off Buffy and Omar off The Wire. 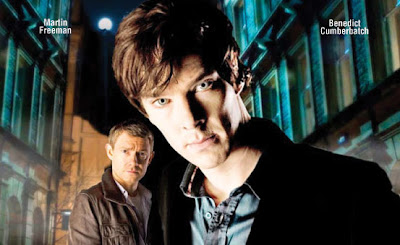 In-depth interview reveal how Benedict Cumberbatch did all his own eye work in the series. 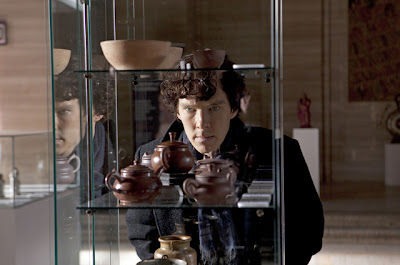 “I trained for months before we started filming but it was worth it. The camera was able to get up close and you can tell that it’s my eyes in every piercing gaze or intense stare. We couldn’t have got a lot of those shots if we’d used a stunt double’s eyes.” - Benedict Cumberbatch

- Cult of Benedictine
Rabid fans of Benedict Cumberbatch have taken their obsession for the talented actor to a more medieval form of worship, and have formed a monastery modelled on the devotional practices of twelfth-century Benedictine monks. Much of his largely female fan-base have taken up the traditional black robes and tonsures to live peaceful lives of piety in the monastery, thought to be based in Suffolk. 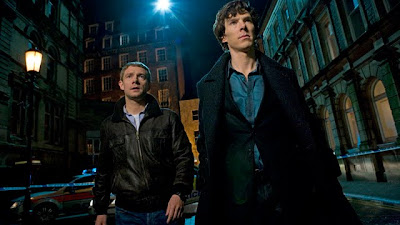 “We have changed many of the traditional words of Gregorian chants to reflect our devotion to Benedict Cumberbatch. We still sing our praises in Latin, except for the Vespers Evening Prayer when we simply recite the hallowed list of roles he’s performed off IMDB.” - Brother Bernard (formerly Elsie Henderson of Wolverhampton)


- Get in shape with Martin Freeman
Martin Freeman shares how he uses the evocative theme tune and soundtrack for the show for his Zumba workout. You too can dance your way to great abs using his exercise tips and a 10 minute workout clip. 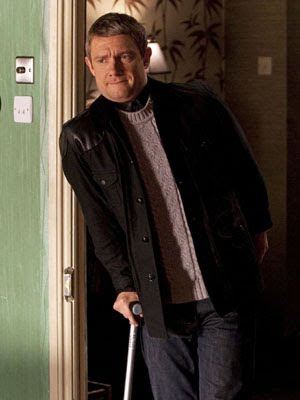 “It was a very physical role. There’s a lot of running around London and jumping off rooftops so I wanted to get in shape, but I find gyms really boring, you know? Now with the Sherlock-based workout, my abs are so hard that washer-women want to scrub their dirty linen against them,” he enthuses.

* Which are so frequently unskippable and unpalatable to toddlers that you have to burn copies of any DVD you buy for your child so you go straight to the menu and not suffer their impatient dismay** at enduring minutes of boring warnings and previews before the menu for their favourite movie pops up on the screen.

** Our son is a particularly impatient child. Can’t imagine where he gets that from. Still I suspect the repetitive appearance of irritating anti-piracy ads bothers many people, not just children.

*** Empty cardboard boxes, tinfoil, sticky-tape and snips. That was all they ever required to build a rocket on Playschool and time-machines aren’t that much harder. Honest.

**** If you think the anti-piracy ads are annoyingly pervasive, just wait until you see the anti-temporal-paradox warnings.
Posted by Debbie Cowens at 4:55 PM