In the collection of Ngaio Marsh short stories I am currently reading, there are a couple of wonderful pieces included that she wrote about writing her characters. I wish I could find more of Marsh’s writing about writing because it contained some of the most beautiful descriptions of character conception I’ve come across. I love this sentence about how Alleyn started to take form in her mind: I tinkered with the fire and with an emergent character who might have been engendered in its sulky entrails: a solver of crimes. Yet she also comes across as remarkably down-to-earth and straightforward about the writing process, and certainly not too proud to joke about how Alleyn must have been ‘going on about 122 when he died’. She appears to have had a healthy and balanced affection for her character. She wasn’t besotted with her creation, it seems more that she had developed an understandably close friendship with the ‘nice chap’ with whom she had travelled to so many places and solved so many mysteries. It’s interesting that she consciously set out to create a detective character who was not like the popular sleuths of her time; she wanted to write a normal person, not an eccentric genius. She felt that ‘she’d better not tie mannerisms, like labels, round his neck’. This comment is most timely for me as I’m getting to grips with my new protagonist. It is, for me at least, a challenge in restraint to write a character who is neither a thinly-veiled roman a clef version of myself or someone else I know, nor simply another version of a fictional archetype differed only by superficial features or mannerisms. To create a real fictional character, who thinks and feels and breathes for themselves. A character who lives the story; one who isn’t just an avatar for the writer and reader to experience the story through. That’s the plan. Hopefully. It’s tricky stuff. Maybe it’s just me because I find people so baffling. Making up stories, places and even whole worlds seems easy in comparison to inventing one fully-fleshed, believable person. 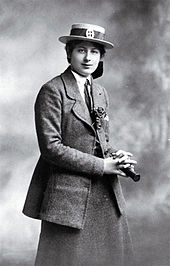 Posted by Debbie Cowens at 6:17 PM

I love Ngaio Marsh so much - primarily because of her characterisations. She has the gift of summing up a character with a few witty well chosen words.

Hurrah! Another Marsh fan. We should form a Dame Ngaio book group and have meetings with tea and cakes and things.