Recently I watched a series by Heston Blumenthal called ‘Heston’s Feasts’ in which the renowned chef designed a series of meals inspired by different historical periods. For those who are unfamiliar with the show, here's the opening of the Victorian episode:

Blumenthal is the mad scientist of the celebrity chefs so the food was always bizarre to say the least. His Victorian feast was themed around ‘Alice in Wonderland’ and somehow this inspired him to make a garden with edible soil and delicious crunchy insects injected with goo, and an absinthe jelly arranged to wobble furiously with numerous vibrators. Whilst normally watching cooking shows causes me to drool like one of Pavlov’s dogs over all the succulent food on the screen, Blumenthal’s show was impressive in a different way. Instead of making me think ‘that looks delicious’ they evoked more of sense of doubt about whether the wacky concoctions would taste any good or if the dinner guests would even believe that the bewildering culinary experiment before them was genuinely edible. It’s like watching the gourmet version Fear Factor. The only difference is that the poor people on Fear Factor look ill or vomit after knocking back a slug and testicle smoothie whereas Heston’s diners turn to the camera and remark that ‘it was actually very good’.

Still they have inspired me to create my own historical or literary themed meals. I am not Blumenthal and my dishes shall be considerably more modest. I’m no food revolutionary or famous chef. I am, however, a lover of gimmicky themed cookery. Heston plays to his strengths of being a renowned innovator and boundary-pusher of the gourmet world. I play to mine of making basically normal food but giving it a cheesy pun in the name. 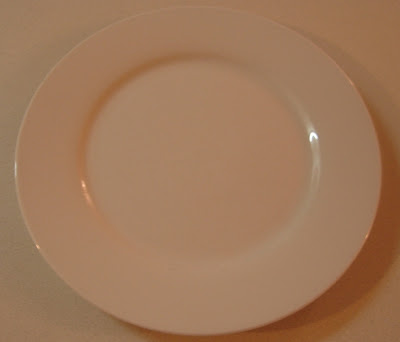 It may look like an empty plate, and that’s largely because that’s what it is. I fear there may be no better way to distil the essence of 17th Century Puritan England into a starter than simply to have nothing. Far be it from me to suggest that the lack of entrees was one of the underlying reasons for the restoration of the monarchy, but it probably had more to do with it than historians would have us believe. 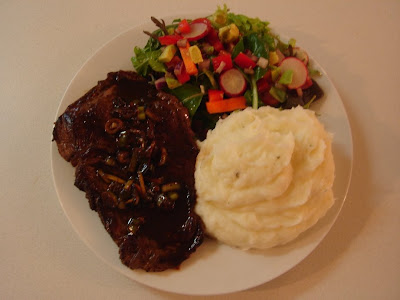 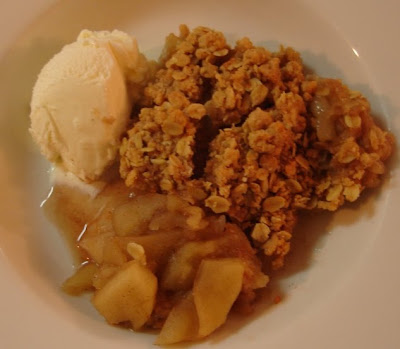 Behold the 'warts and all' Apple Cromwell 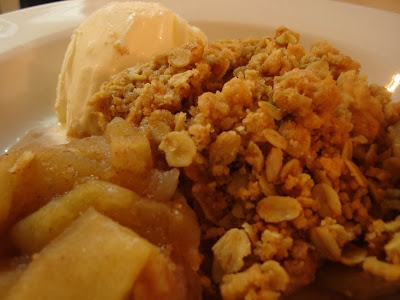 Vanilla was the obvious choice for the Lord Protector Ice Cream flavour and coincidentally it goes rather well with warm apple crumble. 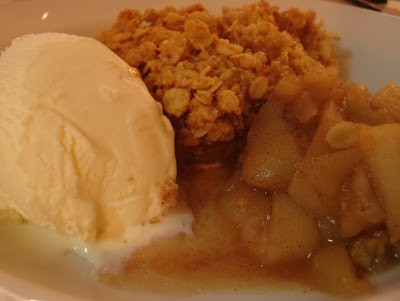 One final close up photo of dessert before the Lord Protector Ice Cream starts to melt (or, more accurately, before I devour it).
Posted by Debbie Cowens at 11:00 PM

Do we get to do requests for other historical menus?

Thanks, although Cromwell as portrayed by Dominic West wasn't hideously untasty.

Historical or literary requests are welcomed, but next weekend is already taken by Conan Doyle's birthday.

The Oliver Crumble was indeed delish!

I'm now having dessert flashbacks. Must be close to lunchtime.