For about the fourth time this year, I’ve come across a library book that someone has written on. In fact I suspect it may all be the work of one individual whose reading preferences, like my own, include the books of Kate Atkinson, Henning Mankell and Victoria Thompson. I’m beginning to have the eerie sense of déjà vu every time I spot their distinctive blue-inked script, sprawling out on a page like the next door neighbour’s cat, smugly sunning itself outside your own feline’s cat-door. I feel oddly unsettled by the whole business. It’s as though I’m some creepy bibliophilic stalker who skulks after some stranger, taking out the exact same books as they do. What’s worse is that the object of my inadvertent stalking is apparently someone who thinks it’s perfectly acceptable to write on books, and not even their own books, but books from the public library. I realise that the person in question probably justifies this behaviour to themselves on the basis that their vandalism is technically correcting the occasional typo. Still to me the act of writing on a book is much worse than the existence of any spelling mistake. I’m not sure why I’m so bothered by this. It’s not like the slash through an erroneous letter and the insertion of a correct one hinders my reading of a word. I do find it very intrusive though. If I happen to notice a small error in a published book, I’ve never found that it prevented my understanding or enjoyment of the book. Such errors are rare and easily forgotten. However, a hand-written correction does distract me. Terribly. My eye shoots straight to it as soon as I turn the page. It pulls me out of the story. I find myself looking at the crossed out letters to discover how the printed word was spelt and then re-reading the sentence to discover whether the word should have been ‘thing’ or ‘think’ to see if the zealous corrector was right or wrong. I suppose this unwanted distraction is the reason why I find this type of correction so irritating. Usually I would cast myself as someone who considers correct spelling and punctuation important. I understand how glaring an error can be once you’ve spotted it. I too wander around supermarkets, wielding an imaginary red marker to circle spelling mistakes, strike out unnecessary apostrophes in plurals and amend ‘less’ to ‘fewer’ for plural nouns. However, I have never actually taken a real permanent marker and started scrawling on the signs and labels. I do not spray-paint corrections on posters and advertisements no matter how riddled with errors they dare to be. While I like correctness, I’m not militant or rebellious enough about it to start vandalising other people’s property. Frankly, books have far more right to be respected and revered by their readers than ads and bill-boards do. If the punctuation and spelling fanatics are so bellicose in their quest to rid the world of errors, I wish they’d start with advertising signage and leave books alone. Maybe it’s because I’ve spent far too many hours of my life as an English teacher, correcting errors in students’ work so that now I’ve lost the passion for proof-reading the world around me. Spotting a spelling mistake does not give me the slightest thrill. Typos delight not me, no, nor punctuation errors neither. I can’t get excited or even particularly angry about them anymore. They’re just too drably commonplace to bother mounting a crusade against. I’m also very aware of the unfortunate likelihood of errors cropping up in the writing of even the most scrupulously correct of writers. I know I’ve seen the blighters jump out of my own writing on the tenth or eleventh edit, having somehow concealed their presence throughout all of the previous revisions. It is entirely too easy to miss them. They are insidious little sneaks at times and without ever meaning to write ‘than’ instead of ‘that’, it happens. I’d like to have some convenient made-up excuse for the ridiculous quantities of mistakes that connive their way into my writing. I could claim there’s an evil gnome who turns on my laptop in the middle of the night and messes with my files. He’s the one who removes commas, replaces ‘their’ with ‘there’ and, on some occasions, even types out the same word three times in a row for no apparent reason. Sadly, there is no gnome. It’s just me and my sloppy typing. Typos are unfortunate but they are at least unintentional. In my mind that makes them far more forgivable than the act of defacing a book with handwritten corrections. Is it just me? Do other people think correcting a library book is a perfectly acceptable thing to do? 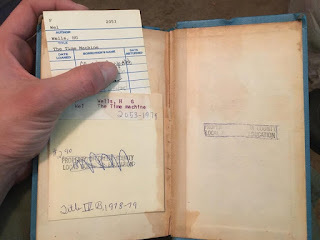 Posted by Debbie Cowens at 8:22 PM

While we're on the subject, you left a word out of a sentence in this post. I'll leave you to figure out what it is and where it should go.

Done and done. Literally, as there were two missing words. At least, two that I spotted this time around...

I just hope my errors don't drive anyone to scribble over their computer screen in marker out of sheer frustration. :-)

I don't think I could correct a library book.. they don't belong to me. I would/could be tempted to correct a book I owned, but even then I'd do it in pencil! I can't even bring myself to write my name in pen in books I own.

Oh good, it's not just me that finds writing on books unpleasant. I couldn't even do it back when I was a student and I'd bought second-hand copies of books purely so that I could underline or annotate passages. I just used post-it notes or scrappy bits of paper instead. I do think writing on books in pencil is perfectly acceptable, I just haven't really ever done it.

That's just wrong. I don't even correct books I own--what if I want to read them again? Too distracting. Honestly. though, it has never occurred to me. Library books are BORROWED!

I feel so relieved that I'm not alone in my shock and indignation about the defacing of a library book. Phew.

I think the worst case of book vandalism is a certain gentleman who tried sanitising "Revolting Rhymes" by twinking out the dodgy words and replacing them with tamer phrases (that didn't actually rhyme).

BTW Microsoft does actually put a gnome in your Word Processor. He's called "Autocorrect" and his job is to muck around with your writing as you type.

I wouldn't correct a library book; it's not mine! That's more about property than a notion of books-as-sacrosanct, though. I love books. I have loads. I can't imagine a house without shelves overloaded with the things. But books are warm, friendly things, with which one has a relationship - not an icon :).

I might correct a book I owned. I quite like finding secret notes and corrections in second-hand books I buy - it's like a little message from the previous owner to me.

Next to a bit of dialogue in Susan Cooper's Over Sea and Under Stone (the set of which I was just sent by an acquaintance) where one of the children describe a boy as "beastly rude", there was a wee note exclaiming, "God, they're such prigs!" - as I'd thought something similar myself, it was a tiny moment of intangible connection with another person who I knew loved the story. Further on, they'd written a little joke based on another piece of dialogue. No more, but still, I rather appreciated it :).

I'll choose a book with a handwritten dedication over one without, too - it's different from an in-text note, but part of the same idea of connection.

"Dear Emily. I saw this and thought of you! I love this book, and hope you'll enjoy it too. Love, Granny." or some such thing. And it leads one to wonder about the book, and Emily. Is it in a bookshop now because she *didn't* like it? Did she have a duplicate copy? Was the dedication written 70 years ago, and Emily's just died, an old lady, with her long-treasured books finally released to the world?

Catnip Mouse - Yeah. There's nothing worse than twinking out words in Dahl. The ridiculous attempt at removing the corrupting influence of the word 'hell' by destroying the rhyme remains engraved in my memory:

'I only hope she cooked it well,
Boiled hearts can be as tough as [boots]'.

Rachel - Good point on the second hand book thing. I also like seeing the messages written in the front and some times the annotations can be highly entertaining. I remember once reading a mystery book where a previous reader had underlined important clues and scrawled notes about their theories as to who the killer was. Obviously, solving the mystery before the detective revealed the murderer was _really_ important to them. They apeared to take the whole process quite seriously. They were wrong in the end though which seems a pity considering the studious effort they had made. :-)