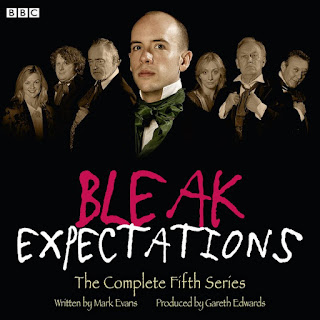 Posted by Debbie Cowens at 3:37 PM

We have hit upon a run of excellent radio comedy recently - helped by your cunning strategy of checking out the writers of Peep Show and That Mitchell and Webb Look and seeing what else they've been involved with.

Bleak Expectations is incredibly densely packed with very, very silly jokes. To paraphrase the narrator Sir Pip Bin, "I love it more than I love brandy or beef or punching a Frenchman!"

The invasion of the martians, the sinister Sir Gently Benevolent rising from the grave (twice), and James Bachman as Harry Biscuit were highlights for me.

I think one of the things that impressed me most about Cabin Pressure was the episode near the end of the series that was 90% set in the plane on the tarmac, with just the 4 main characters chatting while they wait for a possible call. For the bulk of the episode it's sustained chat, without 'plot' stimulus, and it feels pacey and fun. I think it was that episode that made me reflect on how much I'd come to like the characters :-)