My Plan for a Zombie Apocalypse

I was lucky enough to enjoy a delightful stroll today in the glorious sunshine of the early morning, the weather promising to still cling tenaciously to the warmth and radiance of mid-summer on this early aumtumn day. The cloudless blue sky dazzled with a flawless intensity, accentuating the rich and verdant greens of the trees that adorned the skyline, like a well-coordinated handbag. I ambled up the gentle rise of an obliging hill to look out at the majestic, sapphire expanse of the ocean and considered that it was perhaps views such as this, on days such as these, that have inspired many a poet to wax lyrical about the wondrous beauty of the landscape*. Naturally, such pleasing contemplations got me to thinking about zombies. Or more specifically, the best course of action in the unlikely event of a zombie apocalypse. Formulating survival plans for various apocalyptic disasters is, I suspect, a typical enough pastime. The zombie apocalypse is probably one of the more common scenarios and many people tend imagine they have prepared a sensible plan for increasing their chance of survival against the hordes of lumbering undead. Indeed, I recall that more than one student would wile away the minutes in a poor-ventilated English classroom on a summer’s day, devising detailed strategies for evading the slow, but savage, attempts of groaning zombies to devour their brains. I think there may have even been maps and escape route drawn out, just in case the dead really did rise up out of their graves, and start gorging on passers-by with the indiscriminate fervour of a child unleashed on a self-service dessert bar. However, now that the heady ambitions of youth have passed, I can’t help but question the validity of my previous survival plans. While it might be nice to suppose that one would discover latent action-hero-type martial prowess should the need arrive, I doubt that that would actually be the case. All those years playing D&D probably won’t have equipped me with the combat skills necessary wield a sword, mace or morning star, even if I did know where a convenient supply of medieval weaponry was located, and I’m equally sceptical about my ability to satisfactorily defend myself with firearms in a tense, adrenaline-charged situation where I’m attacked by substantial numbers of ravening animated corpses. No, I suspect that when the living dead attack, I will most likely end up as an appetizer for the first bunch of zombies that stumble upon my delectable, brainy goodness. Perhaps this is actually not an entirely bad thing. I wonder now if zombie apocalypses operate in more-or-less the same way as your average pyramid scheme. Obviously, your best strategy is complete avoidance of the whole business, but if you, like me, lack the necessary martial prowess to make it through intact, your best course of action is to at least get in early on the zombie ground-floor. Like pyramid selling, becoming a zombie may well be slightly beneficial for early adopters, whereas the last ones to join get really shafted. If you turn zombie in the early stages of the apocalypse, you at least get to enjoy the early smorgasbord stage when there’s a surplus of panicking people, running around in a convenient state of terror, too shocked and helpless to put up much more of a fight than your average chicken nugget. Then as more of the population fall to the zombie plague and food become a scare resource, you will have had ample time to come to grips with your undead state, and you will have honed your groaning, lumbering and, more vitally, your killing-and-eating people skills to allow you outperform your more recently-turned competition. It’s basically the ‘if you can’t beat them, join them’ approach, and I figure, if you’re going to join them, you may as well do so as quickly as possible. While generally I think the prolonging of life, particularly my own, is a good thing, I’m not sure that I want to fight desperately so as to survive an extra day or two in a state of perpetual terror as the rest of civilisation collapses around in a nightmarish massacre of frenzied brain-eating. Call me a defeatist, but if and when the dead rise up out of their graves and start chowing down on the living, I’m not going to bother fleeing for the country or fortifying the house. No, I’m simply going to throw in the towel, or possibly tie it around my neck as a rudimentary napkin,* and head out to take my inevitable place as one of the groaning undead. * New Zealand doesn’t have much to boast about over other larger countries. Heck, we didn’t even make it onto the Risk board. However, I think we can claim that we do pretty well on the ‘aesthetically pleasing blue sky and green plants’ front. It’s a modest claim, but I think it is not unreasonable to assert that Aotearoa may well have more attractive sky and trees than you could hope to see anywhere else**. ** To be fair, my travels overseas have largely been to heavily-populated urban areas. Other countries may well have had equally nice blue skies before the smog came along. *** Zombies appear in most films to me somewhat messy eaters and I think it would be a great deal nicer for people to be devoured by napkin-wearing zombies. That way when they’re attacked, they can take some comfort in their dying moments, knowing that at least they won’t end up leaving an unsightly stain on the zombie’s ragged garments. 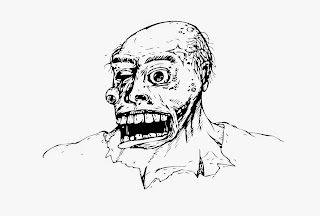 Posted by Debbie Cowens at 5:01 PM

http://loyalkng.com/2009/04/14/popcap-games-presents-flowers-zombies-ur-lawn/ - is the url for a cute sunflower singing about zombies cartoon to share with small boy :) or not, but I am sharing it as part of the plants unit I am teaching year 10 :). (Its all about context...)

It's good to know that you have a zombie plan, and that you'll be near the top of the zombie-pyramid in any post-apocalyptic zombie/human negotiations :-)

Reminds, me, actually, of a book I read recently - one of the plot threads follows a doctor who decides that humans are done for, and that he'd rather zombify on his own terms, so he tops himself chemically in an ice-bath to preserve his brain. It works, too :).

With this kind of plan shouldn't there be some consideration of how to get the least painful bite that turns one into a zombie? Perhaps locate a neighbouring granny without teeth, wait for her to turn and hope that a love bite will be enough for an infection.

In any case, Coastlands is definitely not the best choice for a stronghold.

Hmm, good point, Luke. I think getting gummed by a zombie-gran would probably be the best way.

It would be kind of embarrassing if it didn't work.

Still, it leads me to think that a great way to solve a zombie invasion is with sugar teeth dissolving treats.