Due to my unexpected failure of the obligatory eye-test that I had to undergo as part of the renewing my driver’s licence, I was sent off to the optometrist to get a note saying that I could see well-enough to be deemed safe to drive. It was a little alarming as I hadn’t the faintest idea that my eye-sight was less-than-perfect. I had always assumed that any deteriorating vision would be something I might notice. I rather foolishly thought that I would somehow become aware that actually I couldn’t see things very well by, well, not seeing things very well. But no, apparently this is not the case. You have to stare into many fancy contraptions, read rows small letters and ascertain which lines are thicker than others on charts before it can be known whether or not you can actually see. I suppose I shouldn’t have been surprised to discover that my eyes are not as good as once they were and that I now need glasses. It seems that every time I subject my poor body to some sort of physical examination, the results are never good. It is as though after 31 years of staying in relatively good working order, my fleshy shell has decided that it’s time to start shuffling towards the exit, and the best I can hope for is that it limps towards decrepitude and death as slowly as possible. What I did find a little alarming though was to be informed that I have cataracts. Being diagnosed as short-sighted is hardly a big deal. I suppose it is symptomatic of the unpleasantness of the aging process and that I’m clapping out in another way that I hadn’t been previously aware of, but it’s not that uncommon. If short-sightedness was another flashing road-sign that I’m ambling towards life’s end, it was at least written in small enough letters that my impaired vision would struggle to make out as anything other than blurry shapes in the distance. Cataracts, however, are different. They sound old. It’s the sort of thing you only expect to hear about in the context of some elderly relation’s impending operation. ‘You know Aunt Mavis? The one that’s ninety-three years old. She’s having her cataracts removed next Thursday.’ Apparently my sort of cataracts aren’t the kind that needs to be removed, not yet any way. Still, I find it all unnerving. I like, at times, to think that I’m an old lady and that I’m only a couple of years off donning the beige cardigans and consuming nothing but sugary tea and gingernuts. What I don’t like is someone else telling me I’m old, or least implying that I am by diagnosing me with some condition or other that I associate with old age. It makes me feel the need to rebel. To rush out and prove how young I am with a wild night of clubbing or something. The trouble is that I find clubs too noisy, and can scarcely remember how to stay up after ten. It all seems like a lot of stress and effort. Maybe what I really need to do is find a suitable way to make myself feel young, vibrant and full of life within the comfortable surroundings of home. A cup of sugary tea and a gingernut should do the trick. Heck, I’m still young and crazy. Maybe I’ll make it two gingernuts. 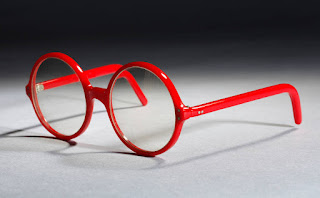 Posted by Debbie Cowens at 5:47 PM

I suspect I will need glasses soon. Luckily galsses seem to have become more of a fashion item as we get older, especially for women.

lol, I was diagnosed with shortsightedness at about 15, so I didn't consider it so much a sign of getting old but more a sign that I should stop reading books under my duvet with a home-made torch.

I found the whole glasses as fashion items weird. The shop assistant seemed expect me to try a bunch of different frames and I just grabbed the cheapest pair I could find. Then there were a series of questions about colour of frames etc. I'm not sure I really care much about the aesthetics of eyewear at all. I suppose if they had a pair of glasses that provided a cunning disguise so that people wouldn't recognise me when I wore them, that would be worth extra effort and money. It would help with maintaining that whole superhero secret identity. :-)

I have a collection of old glasses frames that you can use if you ever want to go retro-80s (or just save money).