Our copy of the 2009 Semaphore Anthology arrived for some delightful pre-Xmas reading. I haven’t read any of their previous anthologies but I must say I was really impressed with the high production values, and the stories and poems included. The cover art is beautiful and I do like a book with nice quality paper too. 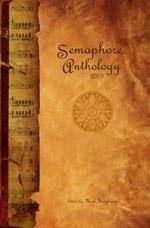 One interesting feature was the inclusion of some lovely poems interspersed throughout the anthology. I have a tendency not to mix my poetry and prose reading I suppose. I have a habit of only picking up poetry when I’m in the mood for it. While I’ll happily cart my novels or short story collections around and read them wherever and whenever I get the chance, I feel more like I have to consciously decide to read poetry. Ideally, I would prefer to only read poetry sitting under trees in sunny meadows whilst sipping a glass of merlot and sampling delicious snacks from a picnic hamper. I rather like the idea of good wine, food and poetry together – like the combination of the three enhances your enjoyment of each. In fact, I’d quite like it if poetry anthologies came with food and wine recommendations noted at the end of each poem. ‘This sonnet is best accompanied with crisp chardonnay or late harvest Riesling.’ At any rate, I usually feel that I ought to be sitting under a tree surrounded by beautiful scenery when I’m reading poetry, whereas prose I’ll happily read in waiting rooms, on trains or basking in the comfort of blobbing around in bed.

However, I did enjoy the inclusion of a few excellent poems throughout the anthology. It was sort of like having brief poetry intermissions between stories.

I enjoyed all of the stories in the anthology but the standout ones for me were Corrigan’s Exchange, The Sideways Man, Dick Whittington’s Blues, On the road to Catmanduel, The Gallows Wife and The Apocalypse Factor.

Corrigan’s Exchange by Ripley Patton is a beautifully written and moving tale about motherhood, changelings and ‘fairy stories’ of the past and present worlds. I wouldn’t want to include any spoilers but I’d say it’s a particularly effective story for parents but I think anyone would be touched by the ending.

The Sideways Man by Robert S. Tyler is an interesting story about a time-traveller and the way his condition affects a relationship with a girl he meets. (While it might sound similar to The Time-Traveller’s Wife it has its own take on things.) This story used the jumping back and forth in the timeline of the narrative to great effect.

Dick Whittington’s Blues by Grant Stone was a charming story that plays on the old tale of Dick Whittington and his cat. The protagonist Richard finds himself down and out in London until he meets a green-eyed feline and his luck starts to change. It’s an evocative tale and creates a vivid portrayal of being an outsider in London. As well as the rich depiction of the setting and the charming cat, it also had a Japanese Sake bar (aptly called Neko’s), so it held a lot of appeal for me. It also veers away from the Whittington legend and reaches a very different but satisfying ending.

On the way to Catmanduel by S. Arthur Yates is a short, quirky story and the pun in the title is appealing. In fact, the use of place names throughout is a cute touch. It’s difficult to say much about the story without giving too much away but it’s a fun twist on some traditional horror set ups.

The Gallows Wife by Therese Arkenberg is a haunting tale that has a lovely folk tale feel to it. The descriptions are striking and it straddles the line between romantic and creepy with great skill and effect.

The Apocalypse Factor by Stuart Sharp is a fantastic story about Dave, an out-of-work actor who shows up to a most unusual TV show audition. The humour in this story is very strong and it’s impossible not to like Dave and feel sympathetic towards him when he’s in over his head.

Overall, Semaphore’s 2009 Anthology is an excellent read with consistently well-executed and enjoyable speculative stories and poems, ranging from the humorous and entertaining to the poignant and moving.
Posted by Debbie Cowens at 2:27 PM

Please please will you publish a poetry book with wine recommendations? And then invite me to a meadow to picnic, drink wine and read poetry?
Also saw your spec-the-halls was recommended! Have read and enjoyed muchly :)

Yeah, I think a wine and poetry book would be awesome. Of course, it would require a great deal of wine and poetry sampling to put together. What a tough job that would be. :-)

Thanks for the kind words on the Spec the Hall story.

Debbie,
Thanks so much for the great review and the kind words about Corrigan's Exchange.

Thanks for your comment, Ripley. Thanks also for writing Corrigan's Exchange. I loved it and it lingered in the back of my mind for days.