I’ve been busy editing ‘The Land beneath the Shadows’ the last few of days. Editing can be fun but it can also be a lot of hard work. I tend to find that I always need to do several rewrites of the first and last chapter as well as a lot of bulky tightening and finessing of the ones in between. However, I had the unusual experience with this book of discovering that it was my chapter four and five that needed the most work. I tried to edit my way through but found I wasn’t achieving what I wanted. So the following day I made a list of everything that needed to happen in the chapters, and everything I wanted to get across and wrote them again from scratch without even opening the old manuscript document. I then re-read both versions and found what worked in each version and wrote another chapter four that was a sort of combination of the two. The next day I edited and polished and fixed up the two chapters, and finally felt happy enough with them that I could move onto the next chapters. The subsequent editing of the next five chapters seemed a lot easier. I knew what I wanted out of each of them and felt I could edit my way there much more easily. The reason for this being largely that I had come to grips with what hadn’t been working in the second draft – the secondary character. One thing I noticed in my feedback from readers was that there were minor changes suggested for the character of the protagonist’s monster friend. They were always small, tinkering suggestions to make him quirkier, scarier or less generic but what I realised after a lot of hard and honest reflection was that the character wasn’t working on a much deeper level. I was starting to wonder if when people think of a character as ordinary or stereotypical, it’s not so much the lack of originality that makes the character not work as the lack of depth. Obviously, original and unique characters are always something to strive for but there are many best-sellers out there with characters who (at least on the surface) appear to be generic archetypes. Maybe the superficial similarity a character might bear to others doesn’t matter so much as making the reader understand and care about what really drives the character. Intuitively I think I realised that I hadn’t quite got the character right but I tried to ignore those instincts because I didn’t know how to fix them and maybe I was too focused on making the main character and their story work. However, after a lot of thought I realised I had to build this character back up from scratch. He had to have as much depth as if he was the main character in his own story. Sure, he was the quirky monster friend companion character but he needed to have his own personal motivations and internal conflicts. I realised after a while that he was already in fact every bit as much of a hero, his character arc was just as compelling as the protagonist’s and his motivations every bit as complex – I just hadn’t been showing it. So I went back to the chapter where he first appeared and started again. I found out that his depth had been there all along, it was just waiting to be discovered. I had been too focussed on the plot and giving him ‘story’ reasons to do everything he did rather than letting his personal reasons come through. It seems obvious to me now but I hadn’t realised it. No character ever does anything to move the story forward or to set out on the adventure of the story. Every thought, act and decision comes out of very personal reasons. The best example I can think of to illustrate this point is Lord of the Rings. On a plot level the Fellowship forms to destroy the ring and save Middle Earth. That is the obvious story reason why each of the nine characters set out on the quest; however, it’s not the individual character reasons. Each of the nine members of the Fellowship have their own very important and personal reasons why they join this perilous mission whether it’s duty, pride, loyalty, honour, friendship or trying to right the wrong of an ancient ancestor. Boromir’s reasons for going are very different to Frodo’s. These motivations help us care about and understand the characters, and knowing what was driving them to go on the quest helps us empathise with future decisions and conflicts, and the different motivations that lead to the breaking of the fellowship despite their best intentions at the outset. So hopefully my latest edit is a great improvement with a much better secondary character. One interesting side-effect of getting to grips with showing the deeper character issues was that it also led to the addition of some quirks, phobias and mannerisms which hopefully make the character more appealing on a lighter level as well. Of course you the trouble with editing is that it’s hard to know that you’ve improved something but you can feel that you have. Fingers crossed that my gut intuition is right on this occasion. 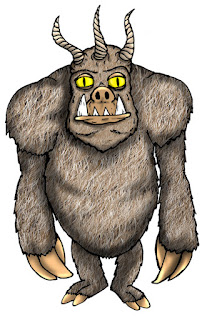 Posted by Debbie Cowens at 4:14 PM

I think there was a balancing act going on in the first draft of Land Beneath the Shadows between on the one hand keeping the story moving and keeping it simple enough for the target audience (under 12s?) and on the other hand building a richly evocative world for your characters and a developed supporting cast.

Seeing the changes you made before sending it out to readers was fascinating - greatly reducing the role of one supporting character to Get the Hobbits Out of the Shire. Putting some of that character depth back into the novel by investing it into the Monster Friend should restore your first, instinctive level of character development but put the weight of it behind someone who's central to the story, rather than just its opening :-)

Excellet, Debz. Sounds like you're very much on the right track. In the next draft it'll be interesting to hear how 'balanced' you feel the story is now between the protagonist and the monster friend.

Thanks Hix. It feels like the balance is working out at the moment but I'm still in the middle of the edit and too close to know for sure.