The talented Dan Rabarts suggested that Matt and I might like to answer the following questions about our book Mansfield with Monsters, since it followed a different writing method to many other books.

1) What are you working on?

Currently, I'm working on-and-off on a kids’ horror book 'The Land beneath the shadows' along with short stories here and there. Previously, I've tended to focus on only one project and stay with it until completion but this year has been a rather more chaotic and scattered approach. Matt and I have been recently working on the Student & Teacher edition of Mansfield with Monsters (a book we collaborated on that was published in 2012 by Steam Press), which has a bonus story (At the Bay of Cthulhu), the Mansfield originals, plus discussion questions. Writing the discussion questions was a fun process - especially as Matt decided not to restrict them to high school level, and so put in a couple where the question itself took some decoding. :-)

2) How does your work differ from others of its genre?

It's a mashup, which has been a pretty popular genre of late, but it's been tackled for the most part in a serious way. Matt and I have both studied and taught Katherine Mansfield's short stories, and are fans of her writing style, her approach to narrative (slice of life, stream of consciousness, focus on women and women's lives). When we decided to adapt her stories we wanted to make sure that we did so lovingly and with a modicum of skill. A cheap adaptation with a few monsters thrown in wouldn't have sufficed - and probably wouldn't have been accepted for publication, and much hate-mail from lovers of Mansfield’s writing.

I've been a fan of horror as long as I can remember, and Matt is no different. Horror fiction has a way of throwing everyday struggles and individual strengths and weaknesses into a new light. We're also fans of fantasy and sci-fi, and I'd say my love of the horror classics is as strong as Matt's love of modern comical literature. Somewhere in that mix of influences we've arrived in a similar writing space - similar enough that we can collaborate successfully.

4) How does your writing process work?

It generally starts with caffeine. For the stories in Mansfield with Monsters we had a two-pronged approach (OK, maybe three or four. Let's see how long this list gets):

2. Look for stories where there was an obvious opportunity to twist it in a horror/SF direction. For example, in Her First Ball there's a story of coming-of-age, of burgeoning sexuality, and of conflict with an older generation. The idea to change the protagonist into a newly-turned vampire was one which sprung to my mind fully formed. For Matt, the story of The Voyage,where a brave grandmother takes her granddaughter on a voyage from the South Island to the North presented a perfect opportunity to increase the drama with a giant sea monster.

3. Where Matt or I had a clear idea of where we wanted a story to go, we bagsied it and sunk our teeth into the process of adapting - twisting, removing, adding to Mansfield's text.

4. When we finished those stories we swapped, made suggestions and edits, refined each others’ work, then passed them back. We did this several times for each story.

5. In a separate strand, we also made a list of monsters/supernatural/sci-fi elements we wanted to include in the collection. We then set about looking for stories where these elements could be included. This represented the middle chunk of the adaptation process (the middle stories). The spark had been less obvious, but we had developed our skill and confidence and were probing the stories more deeply to find opportunities.

6. With a few of the stories we took a different approach. Rather than working individually then swapping stories, we read and broke down Mansfield's stories, brainstormed the nature and extent of the adaptation we wanted to do, then either worked together with a single keyboard and a big screen, or talked through the various sections of the story and tagged each other out on the adaptation process. The Doll's House was one such story. We really broke down what it was about, what we wanted, then looked for the pieces which would allow us to craft a satisfying adaptation. That we wanted it to be a haunted doll's house was an early idea, which we then added a Children of the
Corn element to, then we explored the origins of the doll's house and finally hit upon a revenge motive. It's the most collaborative story in the book and definitely one of our favourites.

Then we sent the stories to Stephen at Steam Press, he gave us brilliant feedback, edited them, helped polish them to a high sheen, and then sent them out into the world.

Matt and I are keen to continue to collaborate, though the next publication I have lined up is an original novel I wrote which is a Jane Austen/Sherlock Holmes pastiche, with the fearless amateur investigator Elizabeth Baskerville and the preeminent detective Sherlock Darcy investigating crimes in Hertfordshire. There is also a very badly behaved pug (or rather, Pug of the Baskervilles). Matt is keen to point out that while he didn't write or come up with any of the ideas, he did give a lot of feedback and did some careful proof-reading of the novel. He definitely deserves a huge thank-you.

We're both very lucky to have each other as sounding boards, as beta readers and editors, and sometimes as collaborators too.

I'm tagging the excellent Paul Mannering, author of the comic SF Engines of Empathy and the zombie horror Tankbread series in next for this Writers' Process Blog Hop so head over to blog to read about his writing process. I expect it will most likely involve dark pacts with demonic entities or sacrificing small cute mammals at the full moon or something along those lines but one never knows. He may find his inspiration in endless re-viewings of Julie Andrews musicals. 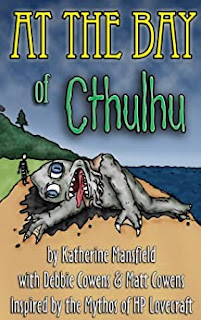 Posted by Debbie Cowens at 2:29 AM