Phew, only just made it before the end of Spec Fic Blogging week!

Here are my reviews of some excellent short stories by NZ authors of speculative fiction.

Note: These are fantastic and I highly recommend downloading them but I'll just review two by NZ writers today :-)

The evil that befell Sampson by Pip Ballantine 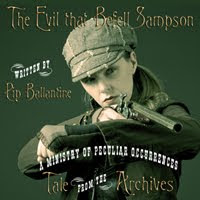 This story follows the dashing Field Agent Eliza Braun of the Ministry of Peculiar Occurrences as she investigates a plot to undermine the efforts of Kate Sheppard and the suffrage movement. The historical details are woven seamlessly with the steampunk and Ministry elements so that it becomes a convincingly fleshed out world within pages and you stop bother distinguishing fact from fiction and just delight in the setting. I really like the idea of creating a heroic adventure story behind delivery of the petition to parliament. It’s an important part of New Zealand history that seems to often get overlooked. This story is a brilliant set up to the character of Eliza Braun and I’d say it’s darn near impossible to read this tale and not be desperate to find out what happens to our intrepid heroine next.

A Ruby in the Rain by Grant Stone 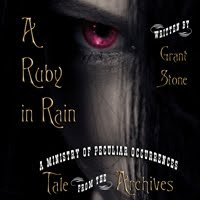 I really loved this story. Set in Auckland in 1896 it follows a case brought to the attention of Lachan King concerning Red-eyed Rob. The paranormal elements are really fun - a terrified criminal pleading for help, links back to Lachlan’s time in India investigating the Kali Death Cult, the nefarious Lord Pra, and of course marvellous steampunk contraptions. I enjoyed the relationship between Lachlan and his assistant enthusiastic inventor/stenographer Barry Ferguson and the historic details woven through made it a compelling setting as well as a fast-paced mysterious adventure story.

Heart of the Salamander by Ripley Patton
Beautifully written story that begins with Maddy who is accused of being a witch and given a strange amulet to sap her powers.

Dragonsick by Simon Petrie is online at Big Pulp
It’s a hilarious story about a plan to raid a dragon’s lair that goes horribly wrong for a cooper and his friend Harald.

A Stretch of Time by Grace Bridges
A lovely tale about Rawiri asking his kuia about her ‘gift’ of time and her story behind it. I liked the fable-like quality and I’m certainly someone who finds the notion of stretching time appealing. :-)

And finally two NZ Spec Fic YA novels on my current to be read pile:

The Shattering by Karen Healey

Our shiny new copy of this book just arrived this week!

Summerton is perfect. A town in the isolated and stunning West Coast region of New Zealand, it is blessed with gorgeous weather and hordes of tourists.

But Keri is immune to her hometown’s charms. Her older brother has just killed himself, without warning or explanation, and left Keri shattered with grief and too many unanswered questions. So when her childhood friend Janna and tourist Sione offer answers, Keri is keen to listen.

Janna and Sione’s own older brothers died in suspicious circumstances. Sunny Summerton has dark secrets. And as they investigate, the answers to their questions become more bizarre. Shattering the secrecy of Summerton may open the trio to dangers they never knew were possible.

Can they save Summerton’s next victim? Or will they become victims themselves

The Bridge by Jane Higgins

Downloaded on my kindle and ready to be started tonight once the little one’s asleep.

The city is at war. Southside, the hostiles live in squalor and desperation, hungry to cross the river. Cityside, ISIS is the brains behind the war. Its job—keep the hostiles at bay. ISIS only recruits the best, and Nik is top-of-the-class smart—so why does IShttp://www.blogger.com/img/blank.gifIS reject him? Before he can find out, his school is bombed. The hostiles take the bridges, and they’ve kidnapped Fyffe’s brother Sol. Now Nik is on the run. And Fyffe is going with him. Across the bridge

It seems a nice way to be ending NZ Spec Fic blogging week with two books by NZ authors that look to be fantastic. Reviews should follow shortly.

This post is part of New Zealand SpecFic Blogging Week, September 19th to 25th 2011. For more posts and a Readers and Posters prize draw, please visit the Speculative Fiction Writers of New Zealand website.
Posted by Debbie Cowens at 3:36 PM