If I ever become a superhero, I’m fighting crime in a comfy tracksuit 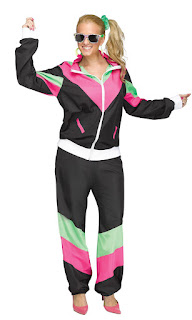 Posted by Debbie Cowens at 5:21 PM

I love the kids of jokes that are possible on radio, where you have a character carrying on as if everything's normal then revealing part-way through a scene that something absurd has been present the whole time. The flexibility around when information is revealed to the listener is awesome, and is often diminished in TV format.

Sensible attire for superheroes, bemoaning as to the kids of today using text abbreviations, spectacles?

I think I am noticing a trend :)

Oh yeah, I'm embracing my inner grumpy old lady. Most of my body hurts most of the time, and I find the world around me simultaneously annoying and confusing. :-)

:) Getting old is fine, though it can get scary.

On the weekend I saw a bumper sticker that said: "Yes, I grew up just like my father."