My Month of Editing

February is here and this going to be a big editing month for me. I’m working on a final (hopefully) polishing edit of HTBATFG at the moment and then it’s onto my first edit of my genie novel. I’ve become intrigued in different editing approaches and may possibly explore new editing methods for the genie novel. Previously, I’ve tended to do at least one ‘big picture’ edit where I try to focus on the overall structure, flow of character arcs, relationships, conflicts etc and then a second edit where I go in and tidy up on a chapter-by-chapter, scene-by-scene and then line-by-line basis. For my current polishing edit, I’m forcing myself to stick to one chapter a day with editing. I’m trying to focus on strengthening the openings and endings of each chapter, pulling apart any scenes or scraps of dialogue that feel flat and generally honing every sentence so that it’s as tight, dense and shiny as possible. I guess I have my own specific understanding by what I mean with each of these terms. Tight editing – no unnecessary words or waffling. Every word must pull its weight and be absolutely essential or it goes. Dense editing – this sometimes can feel like it’s pulling against an edit for tightness at times but it doesn’t in the long run. Density in writing is about packing as much impact, oomph and connotation as possible through word choice and phrasing. You can tighten a sentence just by cutting out what you don’t need. Denser writing comes from seeing a new way to say something better; sometimes you can add a word or a phrase that deftly suggests what a whole paragraph use to explain. Rewriting or adding some dense writing at one point may mean that you can remove a whole chunk later on. Shiny editing – making the writing sing in its own distinctive voice. Trying to polish the writing so that it’s memorable and enjoyable to read. Shiny writing has every paragraph and sentence buffed to stand out and sparkle like its grandma’s best silver (or a pretty vampire in the sunlight, if you prefer Twilight-based similes). For me, each of those three qualities is equally important. Writing that isn’t tight drags and feels slow. Writing that isn’t dense lacks layers of thematic impact and can feel like everything is plain and too explicitly spelt out for the reader. Writing that isn’t shiny is forgettable – the writing is bland, lacking flavour and none of it lingers with the reader. 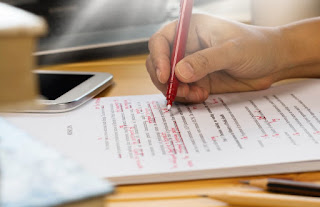 Posted by Debbie Cowens at 5:07 PM

I love the idea of shiny editing :) GO the month of editing!

I enjoyed the version you lent me of HTBATFG so I'm looking forward to the new polished version.

Thanks for the kind words. It's good to know you enjoyed HTBATFG in its less shiny form. :-)